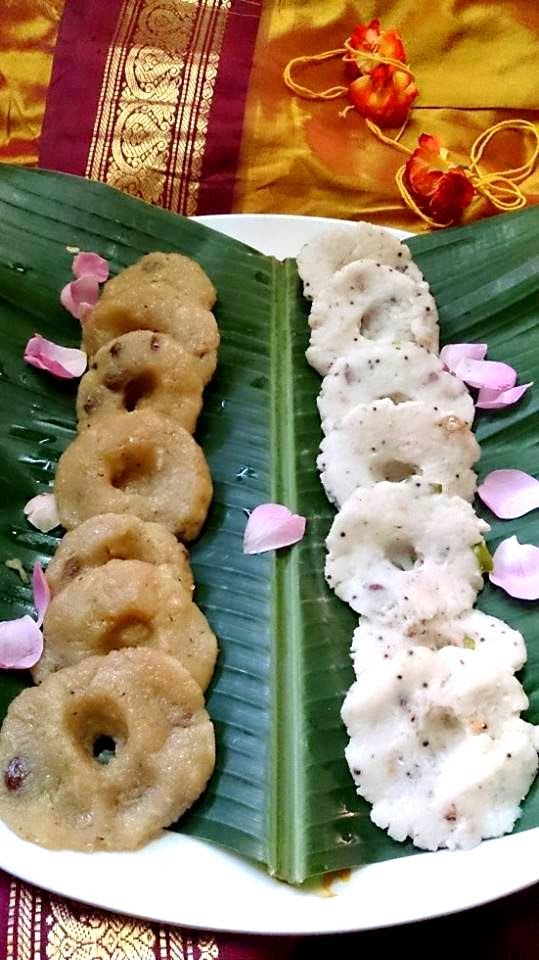 Karadayan Nonbu or Savitri Vratham is a traditional Tamil festival of fasting and tying of turmeric smeared yellow thread around the necks, and  pray for the well being and long life of their husbands.

This nonbu should be done exactly in the time when Tamil month 'Masi' ends and the next month 'Panguni' starts. The legend goes that  "Savithri fought with Lord Yama  to save her husbands life,  therefore the significance of fasting is for the long life and well being of their husbands.

The neivehdyam or the prashad for this fasting is Karadayan Nonbu Adai with butter.Yellow turmeric smeared threads  with a flower are tied around the necks of both married, unmarried and young girls at the appropriate moment after doing pooja.One yellow thread should be tied for the Goddess or the lamp in the house as a symbol.. 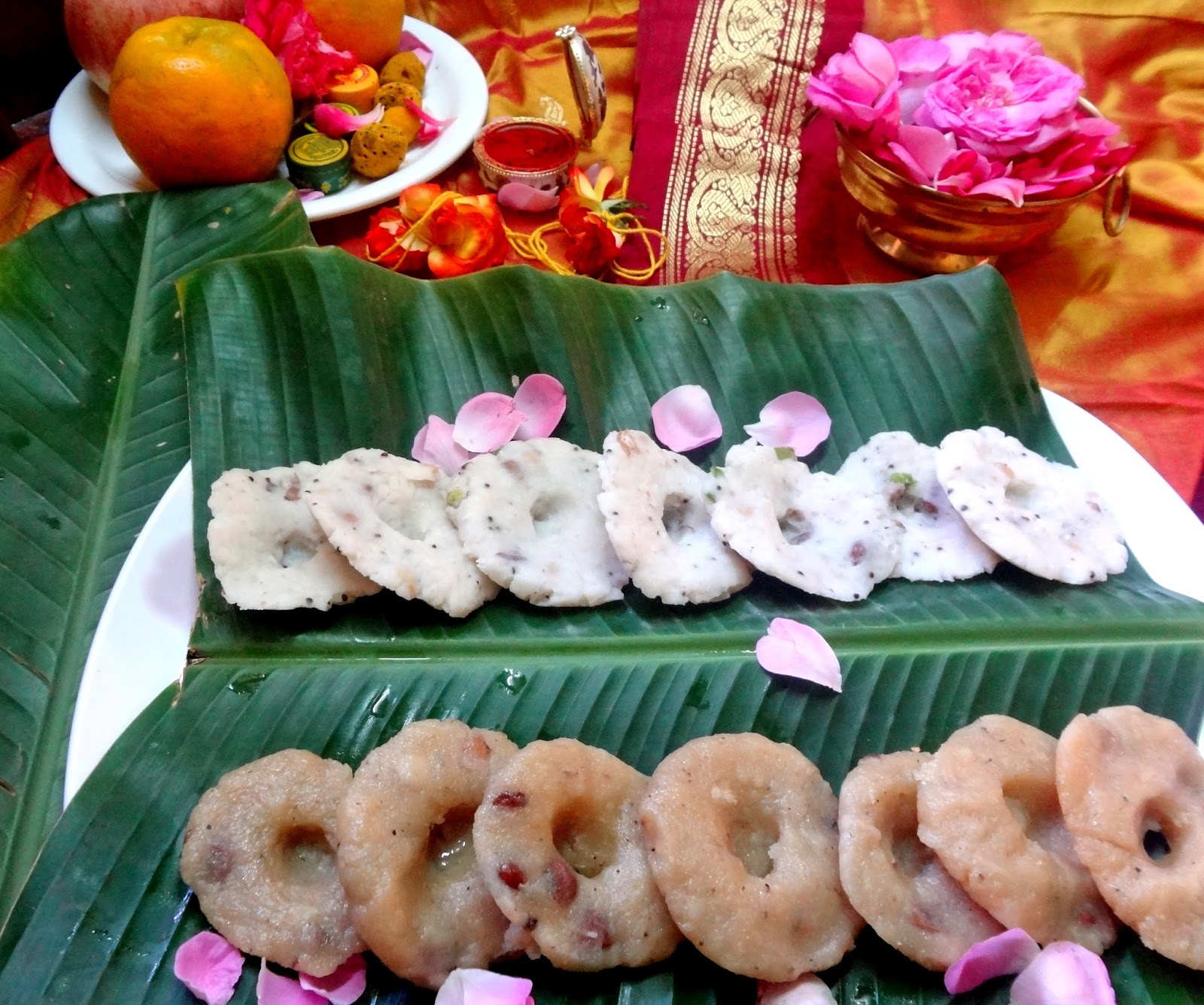 To prepare the savory version of adai.

In a pan, add the oil, let it become hot, add the mustard seeds, let it splutter, add the split udad dal , let tit brown, then add the green chiils, curry leaves pinch of asafoetida, then add 2 cups of water.

Allow the water t o boil well, add the cooked karamani divided from the 3/4 cup cooked. saving some for the sweet adai.

Add the rice flour slowly and mixing with other hand to prevent lumps forming. Stir well, to get a smooth lump free dough.

Let the dough cool down a bit.

To prepare the sweet /jaggery version of adai

You can get started the preps for the sweet adai version while this is cooling..

In another pan add the water, and the jaggery, let the jaggery melt, filter it from impurities by using a sieve, the keep it back on the stove, add the pinch of cardamom, grated coconut, and the remaining karamani already pre cooked.

Let this jaggery water come to a boil, then add the rice flour slowly with one hand whilst you keep mixing with the other. to prevent lumps..

Let this dough come to a cool state.

To prepare the adais ( savoury )

. First knead the dough gently, it should be still warm, pinch off small balls and keep covered to prevent drying off while you keep making the adais.

Take one ball of dough, grease the palm , or a plaintain leaf, gently press in the middle and with  a finger make small dent but not too big a hole.see the pics.

Finish off all the dough balls one by one , keeping them covered as you prepare the next one, .

Meanwhile keep an Idli steamer ready with water and grease the plates, place all the adais around the plate , dont crowd too much, use up all the plates, and keep it in the idli steamer to cook by steaming for 12 minutes.

When you open , they will appear shiny and firm .

To Prepare the sweet adai

The procedure for making the sweet adai is the same, take the sweet dough, pinch off small balls, flatten gently either on a greased plaintain leaf or on the palm itself, make  a small dent and prepare all the sweet adais this way. Then steam it like the savory adais in the idli steamer for 12 minutes till done.

The both versions are offered as neivediyam with a pat of butter and eaten that way. 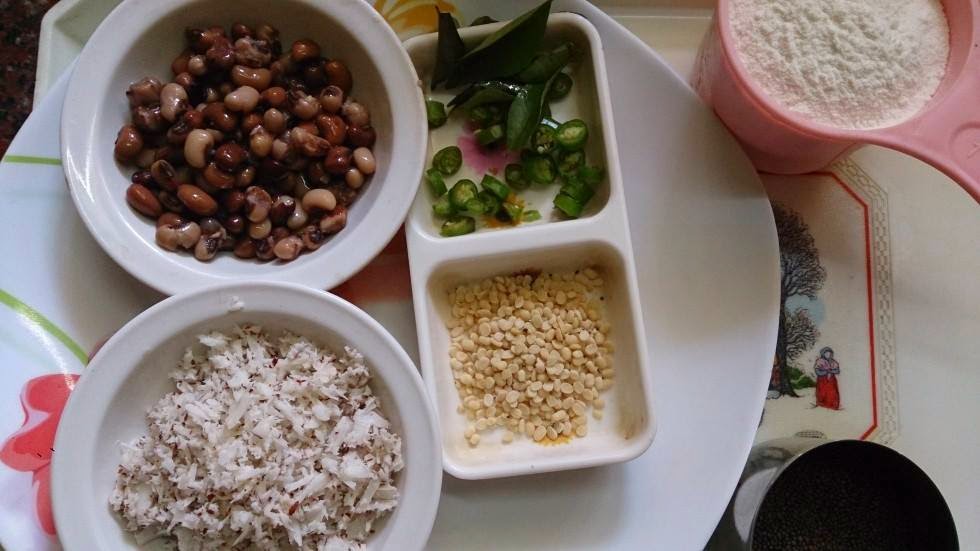 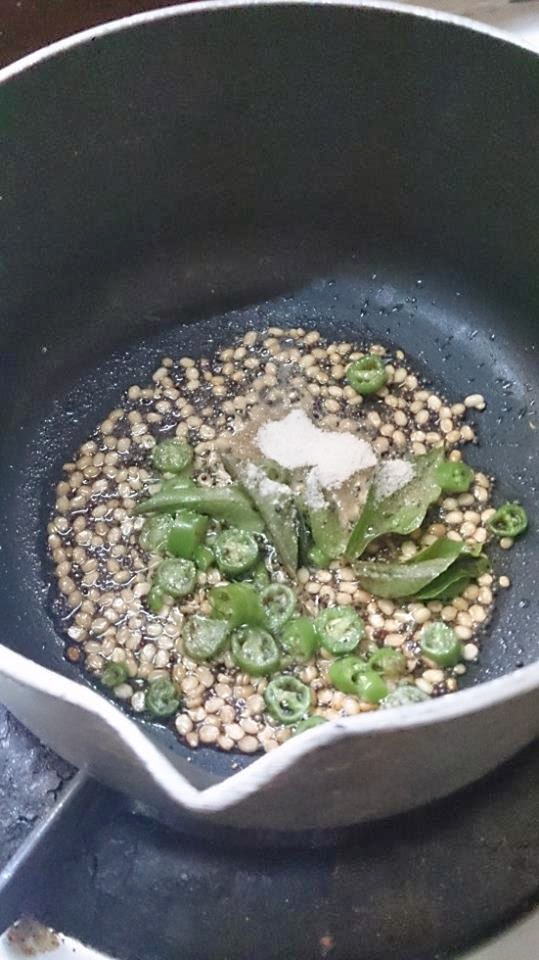 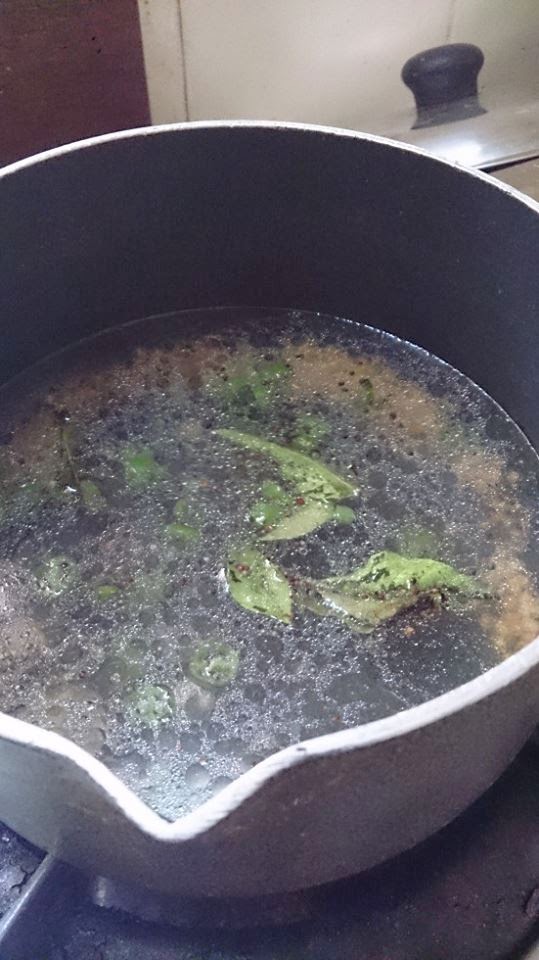 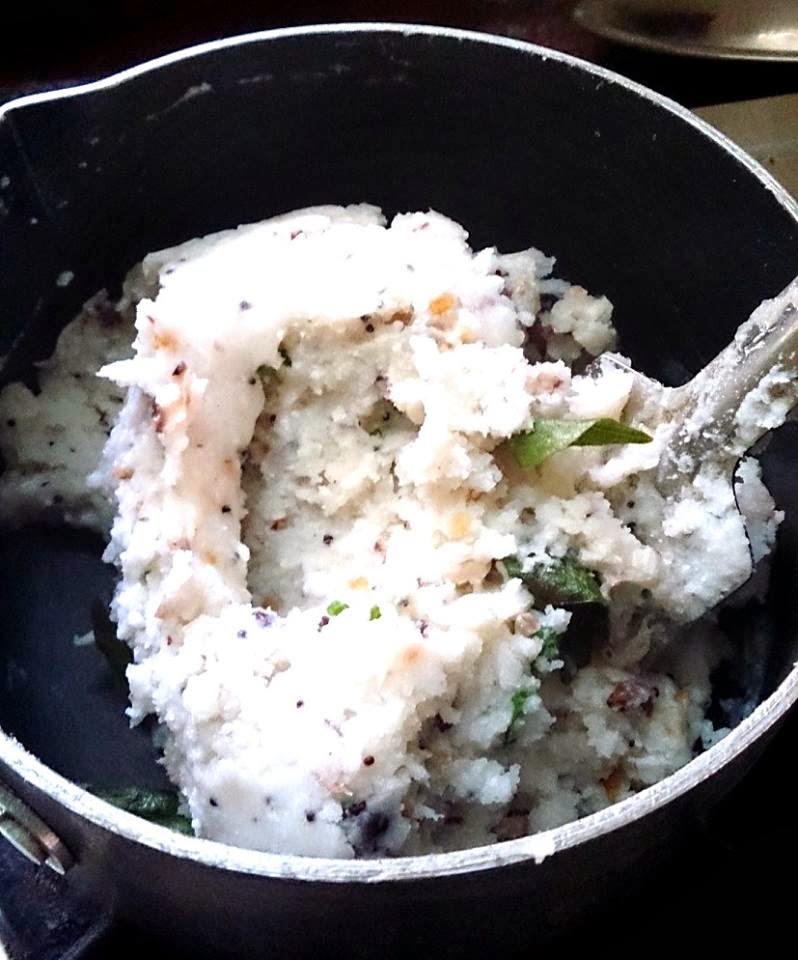 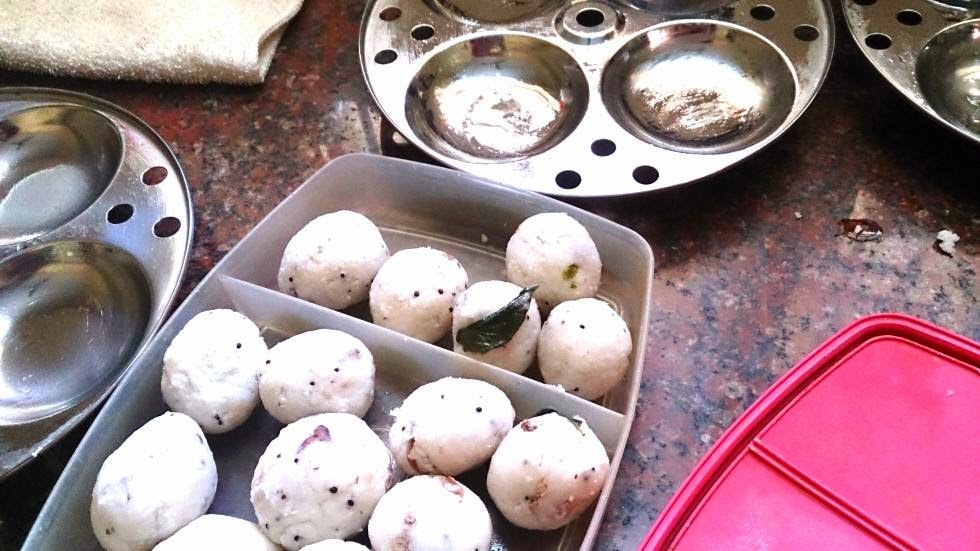 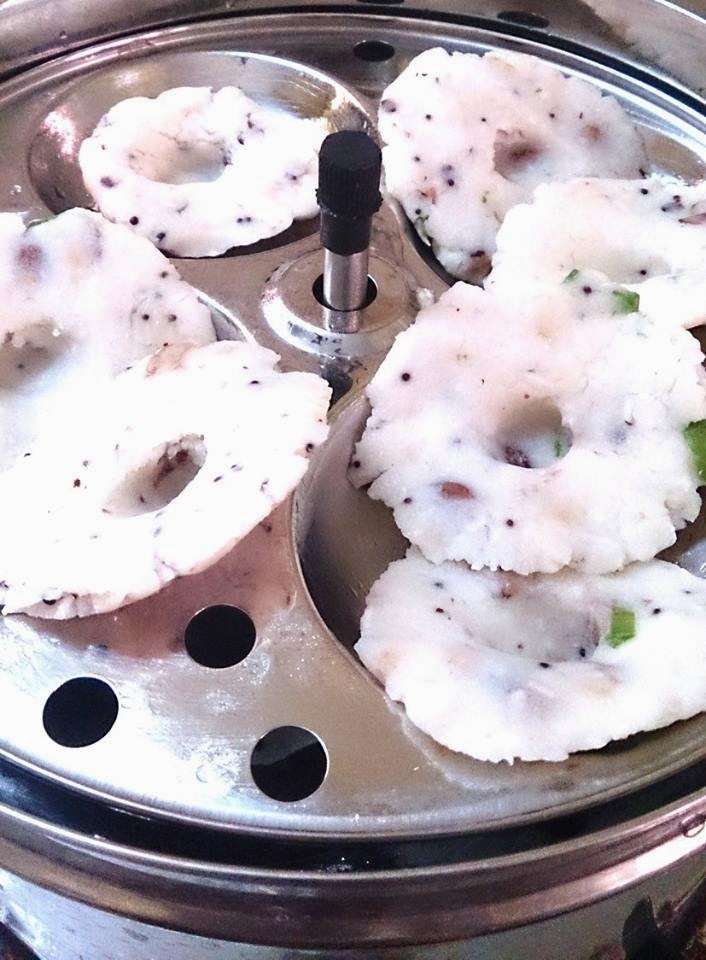 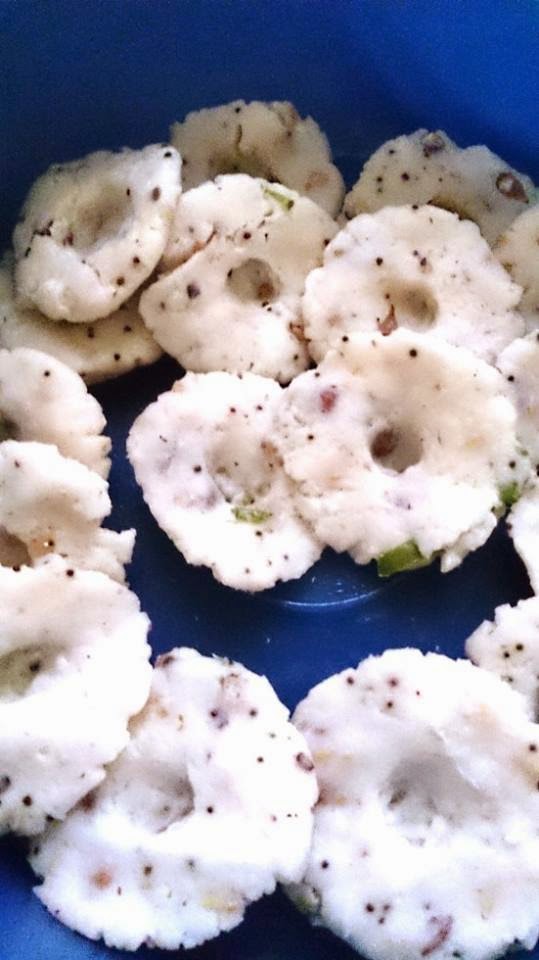 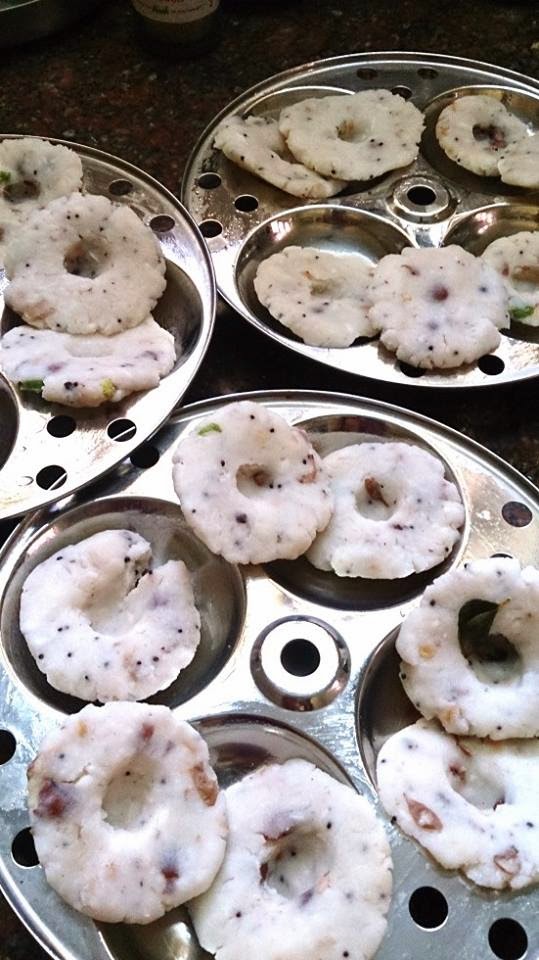 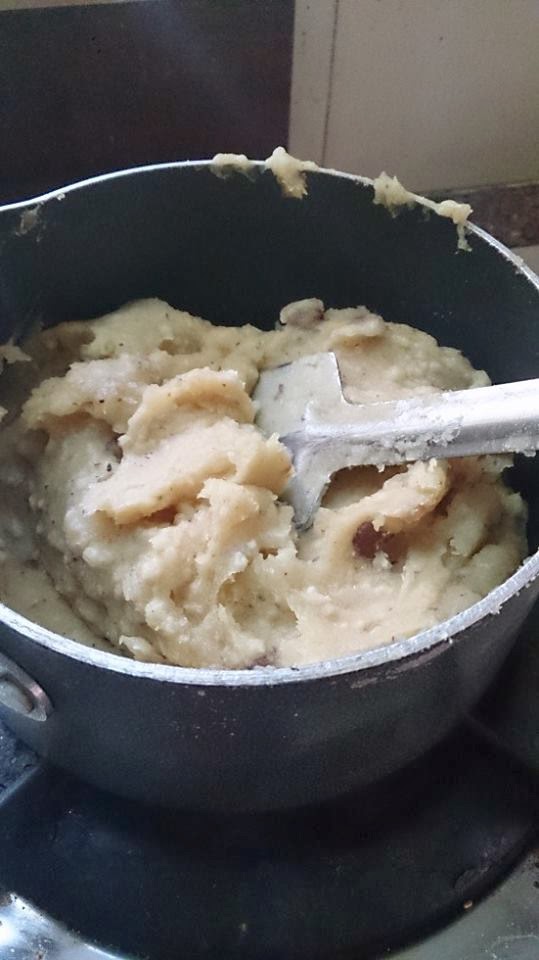 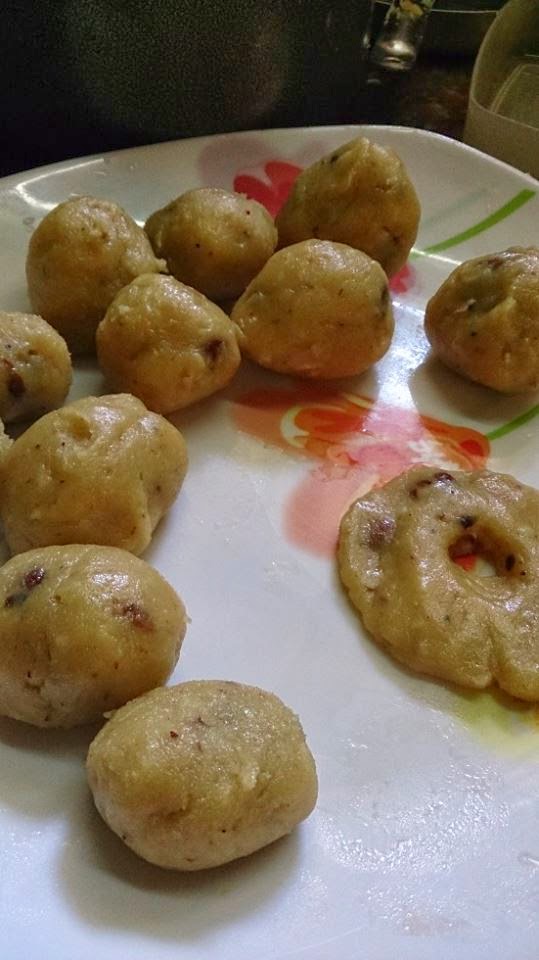 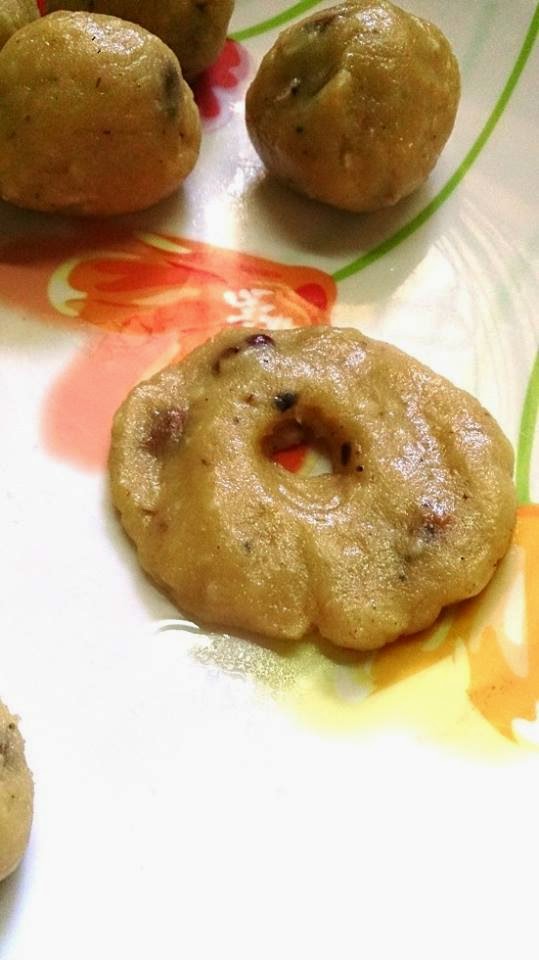 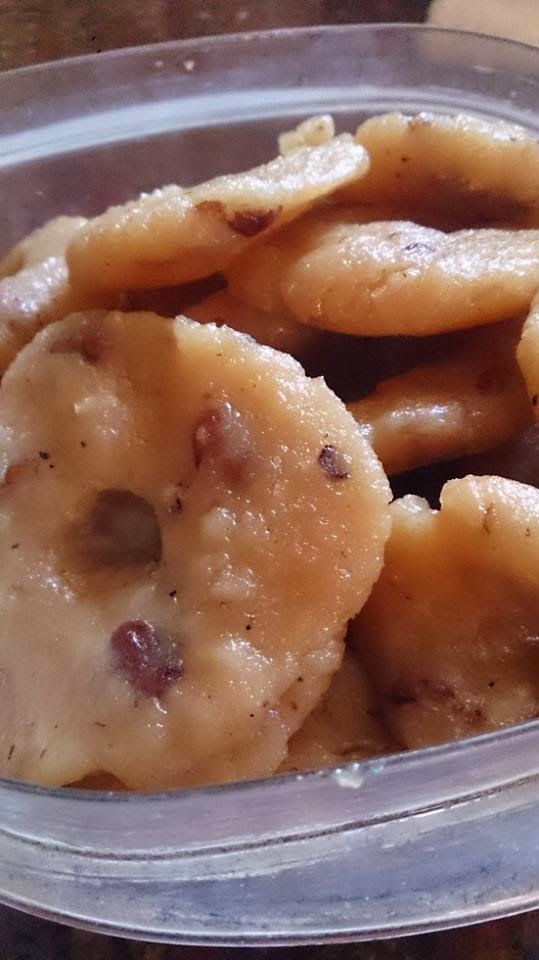 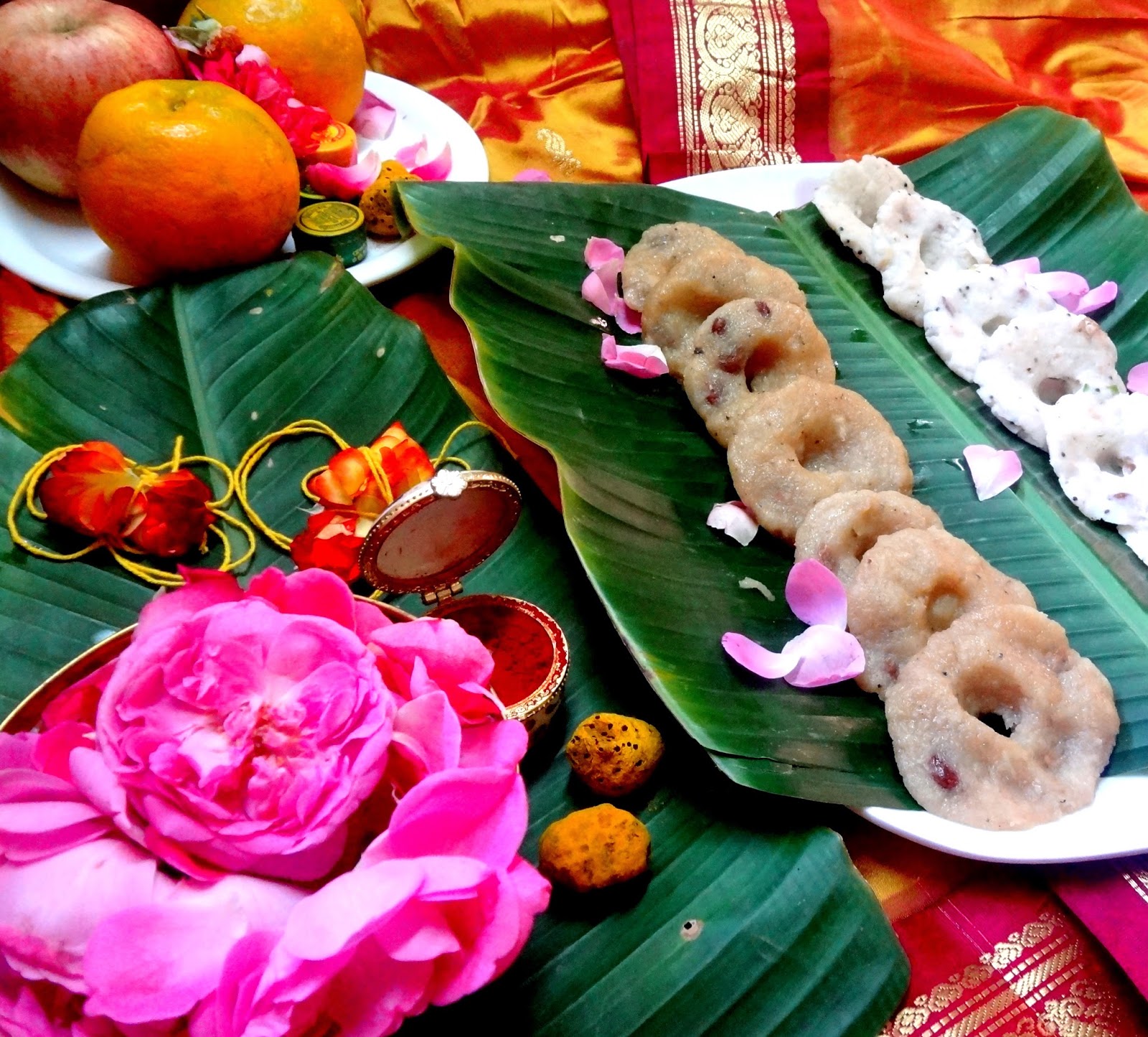 Karadaiyan Nombu or Karadayan Nonbu is a major Tamil festival which is celebrated at the time on Meena Sankranti or Sankramana. It is celebrated at the moment when Tamil month Maasi ends and month Panguni starts. Karadai is the name of a unique Nivedyam prepared on this day and Nombu means Vratham or Upavasam.

It is believed that Savitri got her husband Satyavan back from Yama, the Lord of Death on the very same day. Due to this legend Karadaiyan Nombu is also known as Savithri Vratam. On Karadayan Nonbu day women worship Goddess Gowri and offer her Karadiyan Nombu Nivedyam. After Puja women tie the sacred yellow cotton thread known as Manjal Saradu or Nonbu Charadu for well-being of their husband.

The fast for Karadayan Vritham is observed from sunrise on the transition day when God Surya moves from Kumbha Rashi to Meena Rashi. Fast breaking time for Savitri Nombu might fall any time between current day Sunrise to next day Sunrise depending on time of Meena Sankramana.

King Ashtapati had a beautiful and intelligent daughter named Savitri. The King gave her the permission to choose her husband. One day, Savitri met a young man in the forest who was carrying his blind parents in two baskets balanced on either side of a stick. The young man was Satyavan.

Impressed by Satyavan’s devotion towards his blind parents, Savitri decides to marry him. On enquiry, the King found out from Sage Narada that Satyavan was the son of a deposed king and that he was destined to die in a year.

They led a happy life and soon a year passed and Savitri realized that Satyavan would die any moment. So she kept fast and always followed him. She cooked a special adai and served it to her family and gave some as offering to the Gods.

Next day, she followed Satyavan to the forest. While cutting woods, he fell down and fainted. Soon, Savitri realized that Satyavan is dying. Suddenly she felt the presence of Yama, the god of death. She saw him carrying the soul of Satyavan and she followed Yama.

Yama first ignored Savitri thinking that she will soon return back to her husband’s body. But she persisted and kept on following him. Yama tried few tricks to persuade her but nothing worked. Then Yama said that it is impossible for him to give back the dead as it is against the nature’s law. Instead, he will give her three boons.

Savitri agreed with the first boon she asked for a son for her father. With the second boon she asked that her in-laws be reinstated in their kingdom with full glory.

Finally, for the third boon she asked ‘I would like to have children.’

Yama immediately said ‘granted.’ But soon Yama realized that he had been tricked by Savitri.

Yama remained silent for a minute and then smiled and said ‘I appreciate you persistence. But what I liked more was you readiness to marry a man whom you loved even though you knew that he would only live for a year. Go back to your husband he will soon wake up.’

Soon Savitri and Satyavan were reunited.

First and foremost find the exact time when Maasi month ends and Panguni month starts. The pooja is to be performed at this time. And the fast is observed from the sunrise on the supposed transition day. (For example, if the transition from Maasi to Panguni takes place at today 11 AM, then the fast is from today’s sunrise till 11 AM.) The Savitri Nombu or fast breaking time can be at anytime in the morning or evening.
Two important things needed are Karadi or Kaaradai are a yellow thread with few flowers and Karadai dish preparation.

Take a yellow thread and tie few flowers and two pieces of turmeric pieces in the middle. When the thread is tied around the neck, the flowers will be like a decoration on a necklace and the turmeric in the center like a pendant.
Prepare Karadai adai dish (Nivediya). It is prepared with karamani or toor gram and fresh butter.
For Pooja
An idol or image of any married like Goddess Parvati or Kamakshi.
Flowers
The prepared yellow thread
Karadai adai Dish
Any available fruits
Banana
Banana leaf with tip
Betel leaves and nuts
An unbroken coconut

Prepare the house for pooja which includes cleaning and decorating with mango leaves and drawing of kolam.
Take bath and prepare the Karadai thread and Karadai dish
The fast begins at sunrise and ends when Maasi Month ends and Panguni begins. (This is bit tricky – the ideal method to find the time is the temple priest or one who knows to read the Panchangam).
If the fast is too long, some devotees eat some fruits but does not cook or eat rice.

An hour or half before the exact transition time, place the banana leaf on the kolam or the puja area and place Karadai dish on the leaf. Other items to place on the leaf are the betel leaf, betel nut, fruits, coconut, banana and butter.

Ten minutes or a couple of minutes before the exact transition time, the nivediya is offered to the goddess.
It can be offered by sprinkling some water and ringing the bell or by performing an arati.

(I offer adai and butter to you. So that my husband and I never separate)

Then the devotee can wear the yellow thread with flowers and turmeric around the neck.
After prayers and the fast is broken by eating a Karadai adai.
That which is left on the banana leaf is distributed as prasad along with Karadai dish.