A healthy Breakfast ...Muesli with nuts and fruit 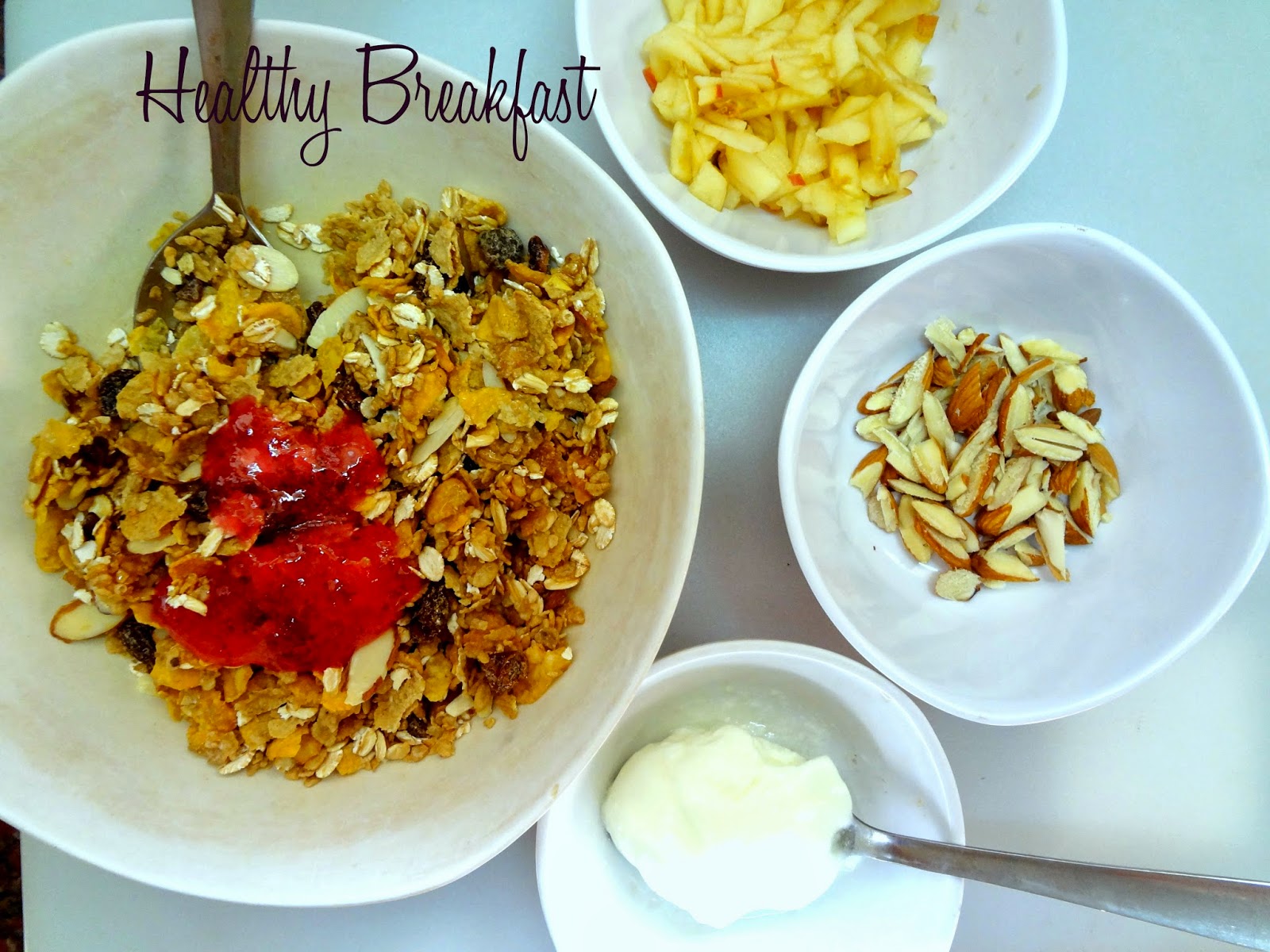 Muesli with fruit and yogurt is a great breakfast option specially for fussy kids who will not have the traditional Indian breakfast foods or when you need a change from the routine, though having Muesli everyday is quite common. I should know as this has been the daily breakfast for my school rushed daughter for so many years now . I keep attempting to make small changes in the fruits, or nuts and even dried fruits. Having it with yogurt is optional and depends on personal choice.

Kids wouldn't mind having it with a dollop of ice cream though :-)

Muesli  is a popular breakfast meal based on uncooked rolled oats and other products based on grain, fresh or dried fruits, seeds, nuts, and mixed with milk, soy milk, yogurt or/and fruit juice. It was developed around 1900 by Swiss physician Maximilian Bircher-Benner for patients in his hospital. It is available in a packaged dry form, ready made, or it can be made fresh.

In Switzerland and Germany, it is also eaten as a light evening dish; Birchermüesli complet is muesli with butterbrot and coffee with milk.

Packaged muesli is a loose mixture of mainly rolled oats and/or cornflakes together with various pieces of dried fruit, nuts, and seeds. It commonly contains other rolled cereal grains such as wheat or rye flakes as well. There are many varieties, some of which may also contain honey, spices, or chocolate.

This dry packaged muesli can be stored for many months. It can be served quickly after mixing it with milk, fil, yogurt, coffee, hot chocolate, fruit juice, or water. If desired, pieces of fresh fruit may be added. Alternatively, the mix may be soaked overnight in milk and then served with fresh fruit or compote to taste.

You may have heard that muesli is a great healthy breakfast, but do you know what it is and whether it's actually good for you? When it was first developed, muesli was typically a dry cereal made from toasted whole oats, nuts, fruit and wheat flakes. Now, you can find many versions, including gluten-free muesli, fresh muesli (soaked overnight in water or fruit juice to soften), toasted or untoasted muesli, and its close cousin: granola. Depending on how the muesli is made, it's often more natural and contains less calories and sugar than granola, which usually has more added syrup to aid in the toasting.

What are the nutritional benefits of muesli?

Muesli typically has less sugar and calories than most breakfast cereals on supermarket shelves.
It's high in fiber and whole grains, which regulate the digestive system, are filling and can aid in weight control.

Muesli is a potent source of antioxidants.

The addition of nuts provides a great source of protein and omega-3 fatty acids (especially walnuts).
Milk or dairy alternatives that usually accompany muesli is a source of dairy and protein. .


The recipe above is a simple one.


How to make fruit compote

Compote (French for "mixture") is a dessert originating from 17th-century France made of whole or pieces of fruit in sugar syrup. Whole fruits are cooked in water with sugar and spices. The syrup may be seasoned with vanilla, lemon or orange peel, cinnamon sticks or powder, cloves, ground almonds, grated coconut, candied fruit, or raisins. The compote is served either warm or cold.

The French invented compote believing that fruit cooked in sugar syrup balanced the effects of humidity on the body. The name is derived from the French word compote, meaning mixture. Compote was originally served as an afternoon snack with sour cream and biscuits.

During the Renaissance, it was served chilled at the end of dinner. Kompot - made from the juice and syrup rather than the flesh itself - remains a popular drink made from homegrown fruit such as rhubarb, plum, sour cherry or gooseberries in Poland.
Because it was easy to prepare, made from inexpensive ingredients and contained no dairy products, compote became a staple of Jewish households throughout Europe and was considered part of Jewish cuisine.

These rich, thick, fruit sauces are made from a mix of fruit that's slowly cooked in a sugar syrup until it breaks down. It is usually served as an accompaniment to other dishes, but can be enjoyed by itself, either over ice cream, next to whipped cream, or on yoghurt. ( source wiki )

As compotes are made with a simple mix of fruit and a sugar syrup, it's important to use the best quality fruit you can find with no sign of bruising.

My recipe for fruit compote

Compote is usually made with sugar, You can use jaggery instead, in this pic I used a compote which is sugarless, as the fruits by themselves are sweet, you can use, strawberries, figs and some dtaes to cook together to get a naturally sweet taste

The usual method is

Bring the water, sugar and lemon juice to the boil. Add the chopped fruit and cook over a low heat until syrupy and the fruit is soft and beginning to break down.

Take the compote off the heat and allow to cool before using. Alternately, store in the fridge for up to three days.
If you combine hard and soft fruit together, allow the hard fruit to cook
until quite soft before adding the soft fruit. This will ensure everything is evenly cooked.

How to make Your muesli at home

Mix all ingredients in a bowl then add into a large glass jar to store.

OR, for something a little different:

1/4 cup of coconut oil
2 teaspoons of vanilla extract
1/2 a cup of honey or agave nectar
Directions:

Using a food processor or knife, chop almonds and hazelnuts to desired size.

Combine all dry ingredients in a large mixing bowl.

Add coconut oil, honey and vanilla extract and stir until all ingredients are incorporated.

Spread the mixture on a large jelly roll pan or cookie sheet with a lip, and bake at 350 degrees for 10 minutes.

Remove pan from the oven and stir ingredients carefully.

Return pan to the oven and bake for an additional 10 minutes, or until ingredients begin to brown.

Let your paleo crunch cool before eating. As it sits, the crunch will get… crunchier. Store in an airtight container, or in single-serving (approximately 1 cup) bags.from mindbodygreen.com 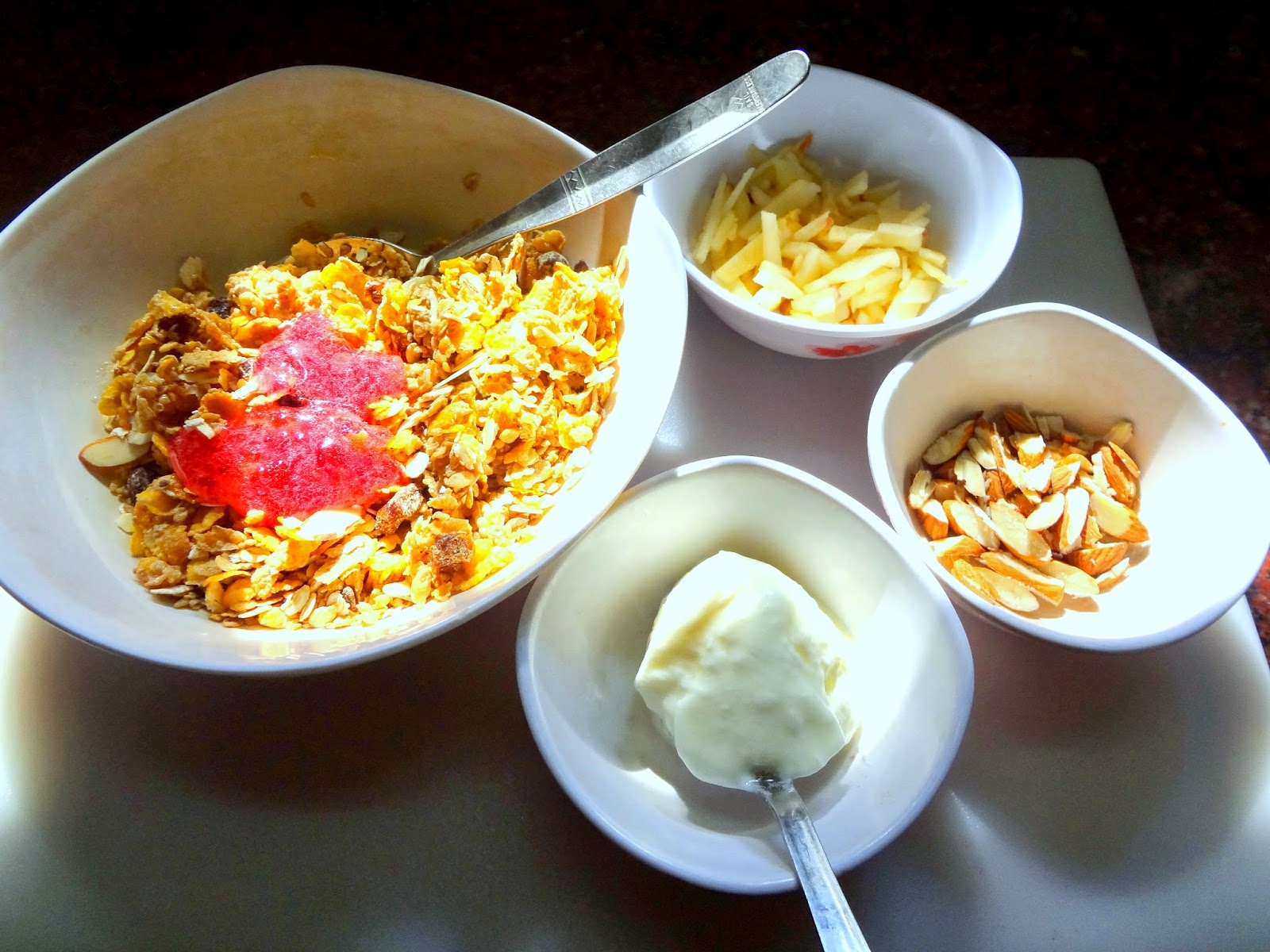