I do not think there is any recipe that has just one line of instruction as to how to make it!! It is just boil , boil , boil till milk is reduced.!! thats it!! Milk fudge or paal khoa as it is called in south is very easy to prepare .


It  is that simple. Paal khoa/khova as it is popularly called in Tamil or Therattipaal is a simple but most delicious milk sweet prepared by reducing thick whole milk  milk in a low flame in a wide pan and adding sugar and some flavorings at the last stage .


Khoa  is a dairy product widely used in Indian made of either dried whole milk or milk thickened by heating in an open iron pan.
It is similar to ricotta cheese, but lower in moisture and made from whole milk instead of whey.
There are three types of khoya - batti, chickna, and daanedaar.

For daanedaar, the milk is coagulated with an acid during the simmering; it has a moderate moisture content.Different types of khoya are used for different preparations.

A concentration of milk to one-fifth volume is normal in the production of khoa. Khoa is used as the base for a wide variety of Indian sweets. About 600,000 metric tons are produced annually in India. Khoa is made from both cow and water buffalo milk.
Khoa is normally white or pale yellow. .
Khoa is made by simmering full-fat milk in an iron karahi for several hours, over a medium fire. The gradual vaporization of its water content leaves coagulated solids in milk, which is khoa. Another quick way of making khoa is to add full fat milk powder to skimmed milk and mixing and heating until it becomes thick. This may, however, not have the same characteristics as traditionally made khoa. 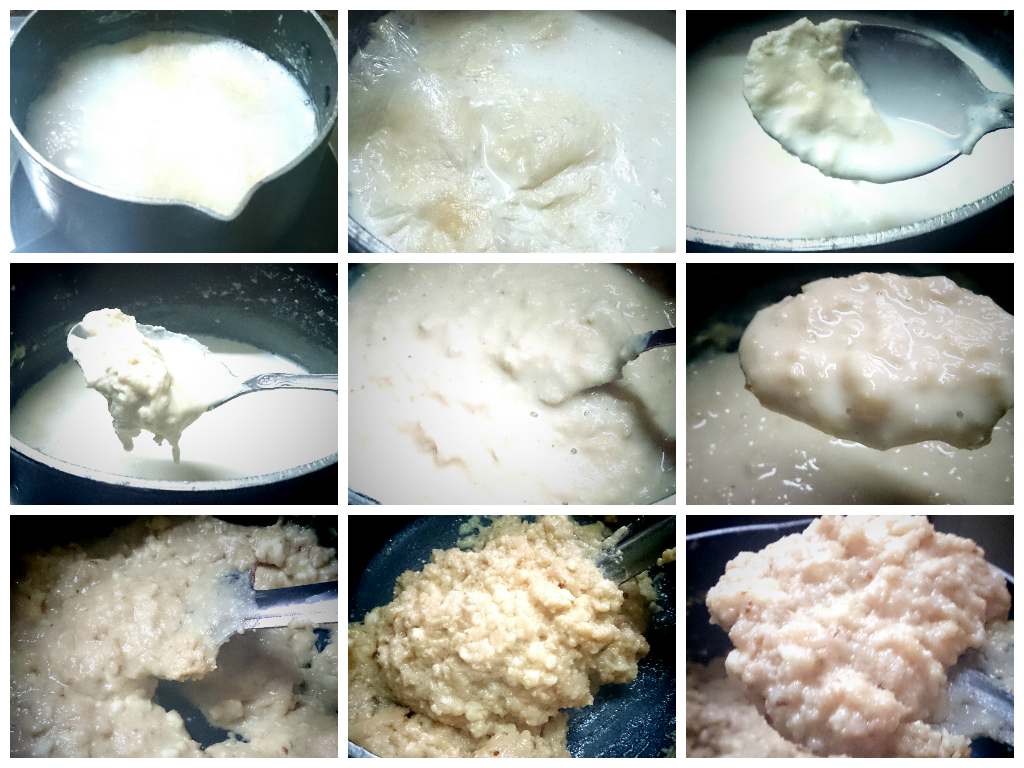 From the pic above you can see that the only procedure is to keep boiling thick milk on a very low flame preferably in a non stick kadai/pan  and keep scraping the sides as the cream forms and you need to break the layer of cream and adding it back to the boiling , reducing milk.

Now to the recipe

1 litre of full fat milk or whole milk.
1/2 cup sugar  or as you wish . depending on how sweet you like to have the paal khoa.
Pinch of cardamom powder
1 tbsp butter or melted ghee.

Keep the milk to boil on a very low flame and you need to stick around the gas stove and not leave it to do the job, as the milk will start to stick or burn at the bottom.

Sugar and flavorings will be added at the last stage when the whole mixture has reduced and thickened.

I usually prepare such sweets which require constant monitoring,  when I am doing cooking in the kitchen  usually when the lunch is getting prepared. and keep this milk to boil on a dedicated burner, on a very very low flame and keep an eye .

You need to keep pushing back the layers of milk cream forming with a spoon  or a spatula and keep stirring the boiling reduced milk at intervals , taking care not to scrape the bottom as  sometimes a brownish layer forms on the bottom and you dont want to add that to the milk khoa.

After some 20 minutes when the milk has reduced well, the colour changes to light pale brown .

Finally when the milk mixture has thickened and come to a muddy like consistency, add sugar and the flavors and keep stirring well. Add the butter or melted ghee now.

After adding sugar again the mixture will loosen  a bit , so need to keep stirring till the whole mixture has thickened well.

Test for consistency at this stage. It is very important to remove the paal khoa when it is still a bit moist and thick , as it will  harden a bit after cooled.

you can pour the thickened mixture into a greased pan and cut into squares for easy serving .

Look at the texture of paal khoa, moist , yet firm and granular. 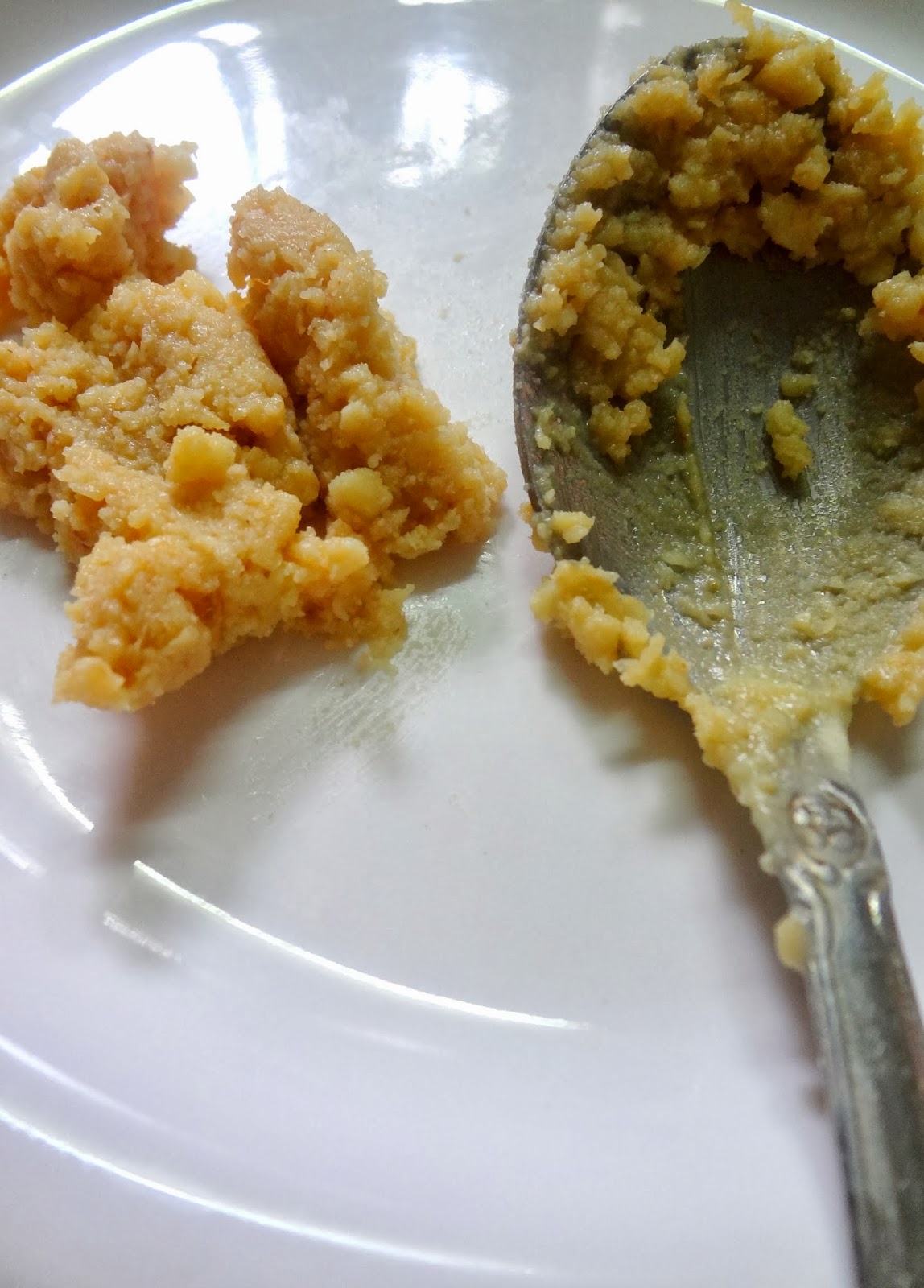 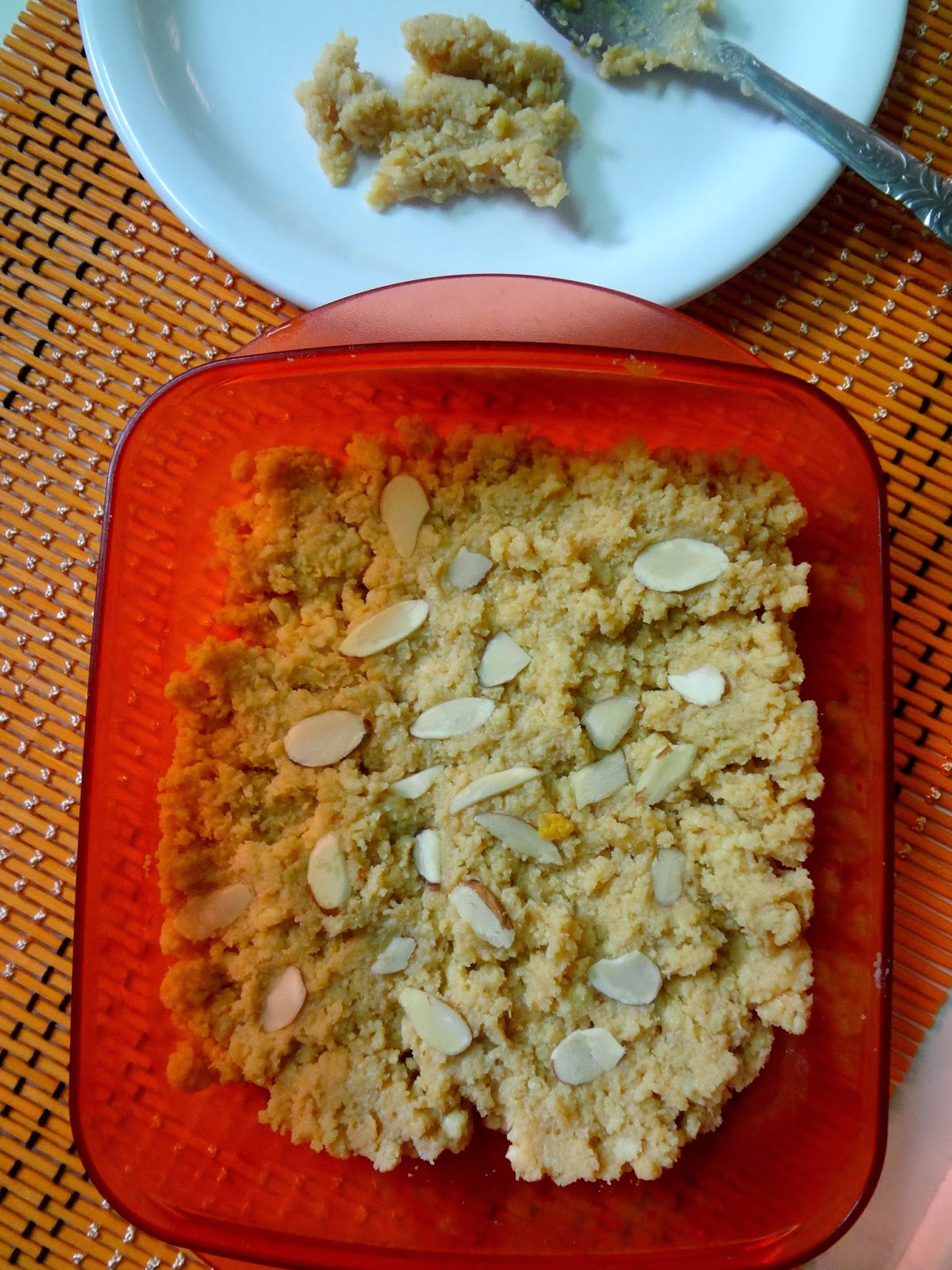 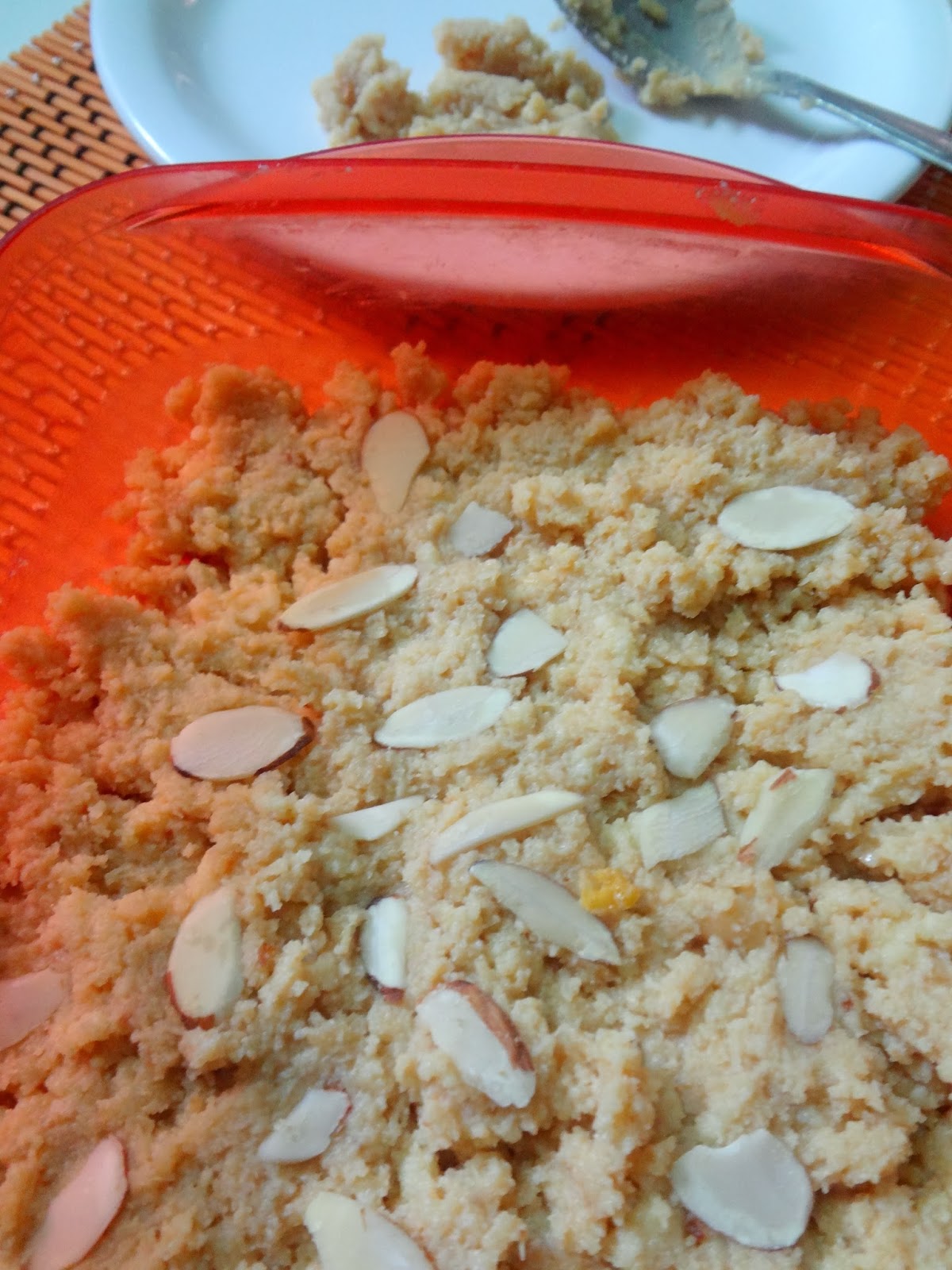 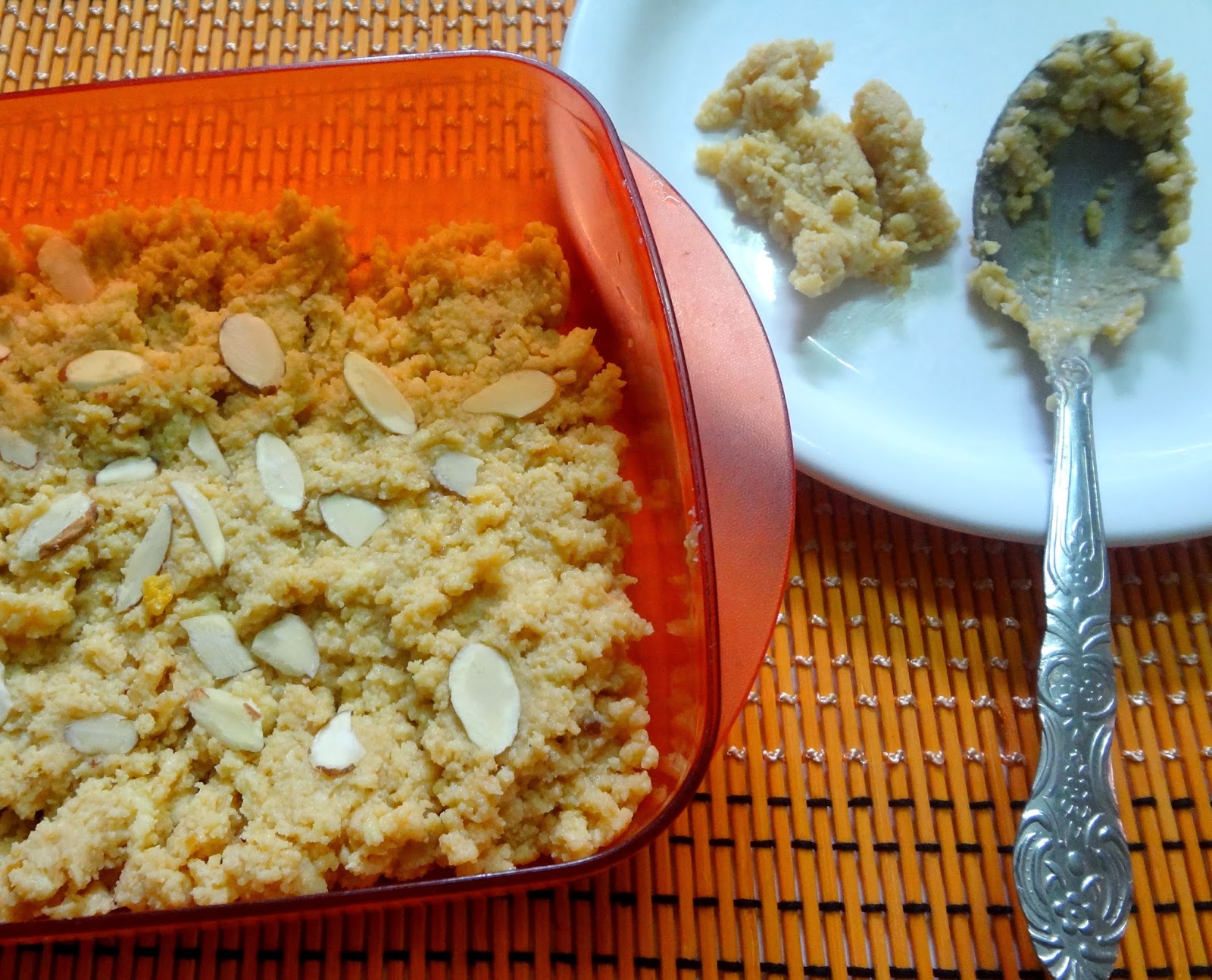 When  cooled completely, you will see the whole paal khoa/Milk fudge  mixture very soft, but together with grainy texture that is the correct consistency.

Generally paal khoa / Milk fudge is served as it is without any embellishments as this is a very tasty lip-smacking sweet to be had without any frills.

If need be,  garnish with almond slivers for a presentation.

For quick Milk fudge, you can use condensed milk, ad milk powder and keep stirring till a smooth thick consistency is reached.

In this case you will not get the grainy texture but it will be tasty.

Another method is also to add crumbled or blended ricotta cheese to the boiling mixture to enable quick thickening and also to impart a rich grainy texture.

Traditionally it was prepared by gradual reduction of milk over an hour or so til the milk reached a thick pasty consistency.

Milk fudge can be prepared easily in the microwave too.