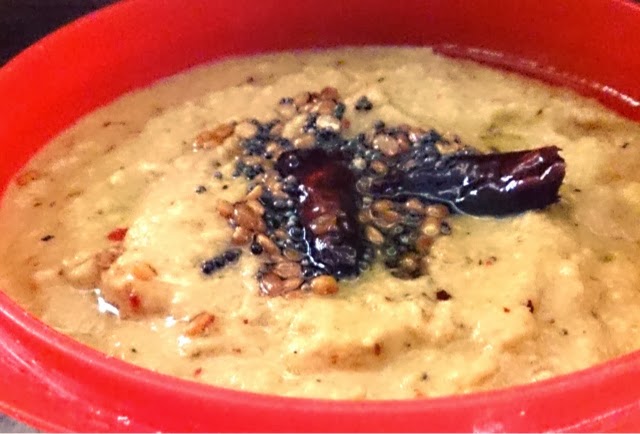 Chayote is popular in South Indian cuisine. It is popularly referred to as "Bangalore brinjal (Bengaluru vankayya)", called in Kannada as "seeme badanekai" - brinjal/eggplant/aubergine of the plateau. It is used in vegetable stews like "sambar" and "palya".

In Tamil Nadu in South India, it is known as "chow chow" and widely used in everyday cooking for "sambar" or "kootu". In Andhra Pradesh, it is called Bengaluru vankayya and sold in vegetable markets in the name of "chow chow".

This togayal is very tasty and a great replacement to coconut chutneys as an accompaniment for South Indian dishes like idlis , dosas and a great chutney to mix with rice and have with papads . 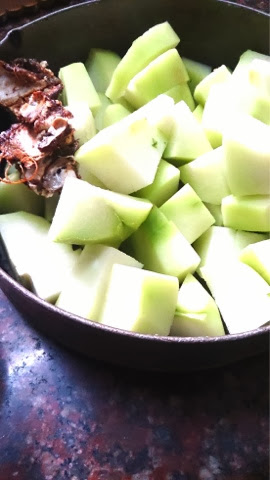 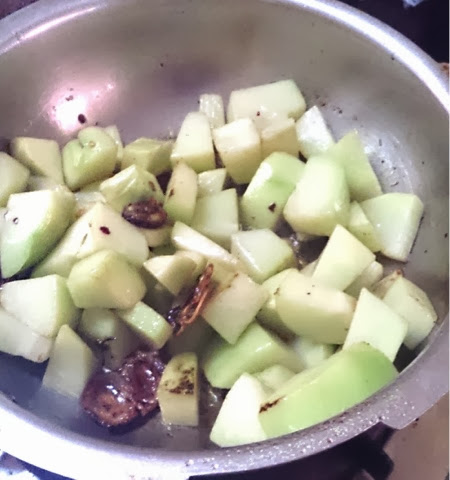 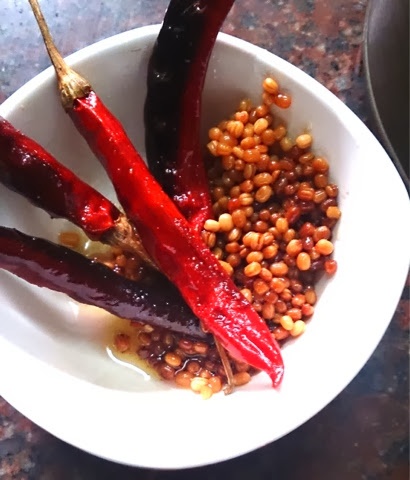 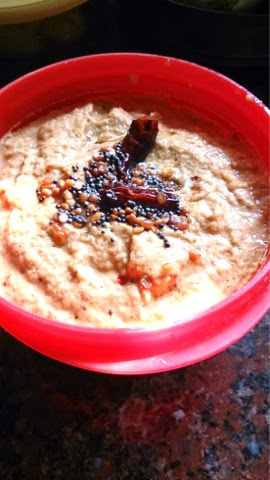 2.  Add the small ball of tamrind too while sautéing as it will soften it a bit.

3. When the chow chow pieces look softened but firm   , take it off the flame and keep aside to cool .

4. In another small pan add a tsp of sesame oil and fry the udad dal and red chillies till the dal turns golden and aromatic . The red chillis should be one crisp.

5.  When all the ingredients are cooled, grind the  sautéed roasted udad dal and the red chillis first in  the mixie  to powder it well , or to a coarse powder ,  Then add the sautéed chow chow/ chayote pieces with the softened  tamrind , salt to the powdered hdad dal red chilli powder and continue to grind everything  to a paste without adding even a drop of water!  Reason being chow chow has lot of  water in it and will release it while grinding .  Another reason is the togayal will not spoil if no water is added.

6.  When the chow chow togayal is nicely ground to a paste , remove and then prepare a tempering by crackling mustard seeds, adding 2 small red chillis in a tsp of  sesame oil  and pour the hot tempering over the ground togayal and stir well.

7. This makes an excellent accompaniment  for rice. Especially curd rice, with idlis and dosas, or simply mix with rice and eat.

Chow-chow or chayote is also known as bangalore kathrikai in some parts of south India. It is a pear shaped vegetable with bland taste. Chow-chow is rich in amino acids and vitamin c. Chow-chow can be used to make sambar, kootu and poriyal.

Use Most parts of the chayote are edible; the starchy tuberous parts of the roots are used like potatoes, the shoots as a pot herb, the young leaves as spinach or as a medicinal tea, the fruit as a vegetable and the nutty stones inside the fruit are prized by cooks. When young the fruit can be eaten whole but as they get bigger it is best to remove the skins as these can get a bit tough. They are equally delicious raw or cooked and go well with nutty, hot, salty, spicy or sour flavours

The fruit does not need to be peeled to be cooked or fried in slices. Most people regard it as having a very mild flavor by itself (though some find it unpalatable). It is commonly served with seasonings (e.g. salt, butter and pepper in Australia) or in a dish with other vegetables and/or flavorings. It can also be boiled, stuffed, mashed, baked, fried, or pickled in escabeche sauce.

Both fruit and seed are rich in amino acids and vitamin C. Fresh green fruit are firm and without brown spots or signs of sprouting. Smaller ones are more tender.
The tuberous part of the root is starchy and eaten like a yam (can be fried). It can be used as pig or cattle fodder, as well.

The leaves and fruit have diuretic, cardiovascular and anti-inflammatory properties, and a tea made from the leaves has been used in the treatment of arteriosclerosis and hypertension, and to dissolve kidney stois a popular seasonal dish for the holidays.

In the Philippines, the plant is known as "Sayote" and is grown mostly on Mountainous part of the country such as Baguio City and parts of Cordillera Administrative Region. Chayote is used in many kinds of dishes such as soup, stir-fried vegetables and chop suey.

In Darjeeling, India and Nepal, the plant and fruit is called ishkus probably derived from the word squash. Its shoots, fruit and roots are widely used for different varieties of curries.

In Tamil Nadu in South India, it is known as "chow chow" and widely used in everyday cooking for "sambar" or "kootu". In Andhra Pradesh, it is called Bengaluru vankayya and sold in vegetable markets in the name of "chow chow".

While this vegetable doesn't stand out with any one particular nutrient, it gives you almost all you need in the right proportions. That said, the Chow Chow is high in fibre, making it good for digestion. It contains about twice the potassium and Vitamin C as the average cucumber. 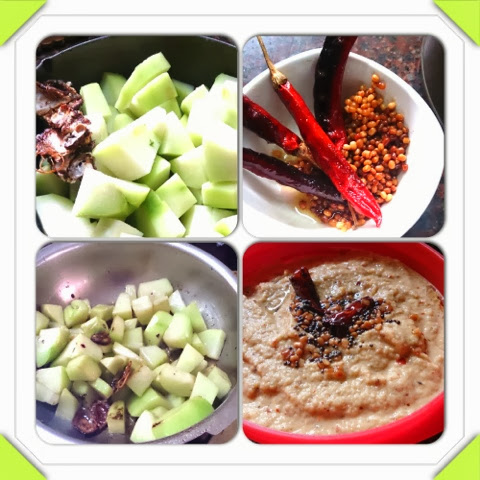