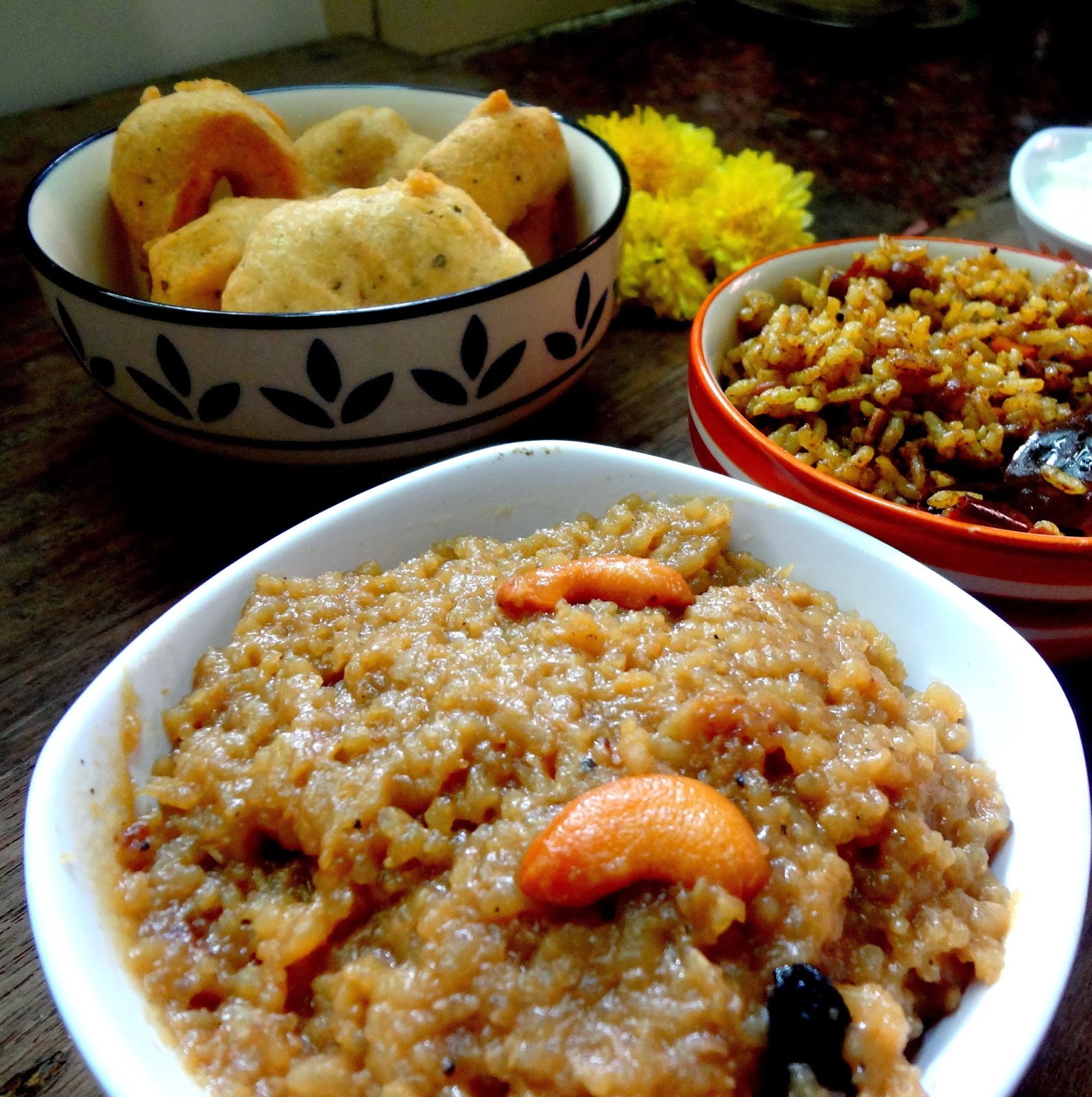 Sakkarai Pongal /Chakkarai pongal is an inevitable Sweet preparation as a prashad/Neivediyam to the Gods during festival times. No festival in complete without the mandatory Sakkari pongal and some vadas  , usually Paruppu vadai. ( Lentil Vadai )

During the festival of pongal Sakkari Pongal is the highlight along with the salted version called the Ven Pongal or Khara Pongal.

Traditionally in South India , almost all temples  offer prashad/Neivediyam to the deities in form of Sakkarai Pongal and Puliyodarai,  the tangy spicy tamrind rice.

This is a practice in all Vaishnava  temples particularly and the Sakkarai Pongal served in temples is something that cannot be emulated at home even with the best ingredients and replicating.. Am convinced the taste comes mostly from the divinity present in the atmosphere and the sacred sanctity of the temples.

However we can still make the almost near to temple taste   Sakkarai Pongal at home by following some simple steps.


1. Roast the dal till lightly golden brown and pressure cook or cook with rice  in a covered cook pot like haandi  adding sufficient water.

2. Melt the jaggery with just enough water to immerse it and filter to remove the scum.Golden roast with ghee both cashewnuts and raisins .

3.  Add the mashed rice and dal mixture to the melted jaggery ,adding the roasted nuts and raisins as well.

4. Add the required amount of melted ghee and keep stirring till the mixture thickens a bit. 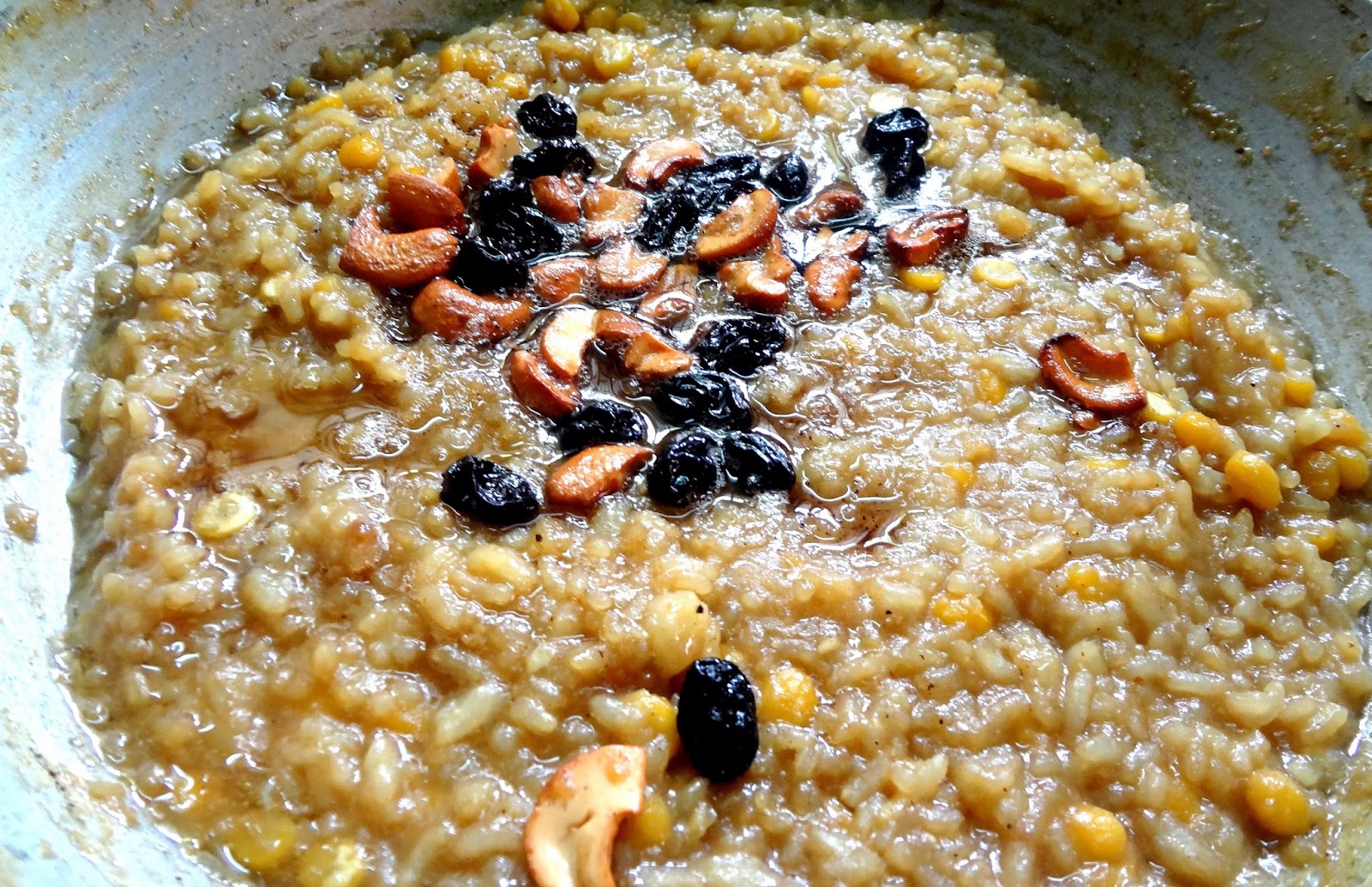 4. Sakkarai Pongal is ready to be served with more dollops of melted ghee if you wish.


1. Roast moong dal/paasi parup till golden.
2. Pressure cook rice and moong dal  with the 2 tbsp of chana dal with sufficient water to get a very mushy consistency. Pressure cook upto 5 whistles if necessary.

3.Grate the jaggery or powder it and immerse sufficient water to melt it, strain and clear the impurities if any by filtering.

4.After 5 whistles or more depending on your cooker model, let the pressure cooker cool down, remove the cooked rice and dal, ,mash them well with a wooden ladle and keep aside, at this point if you note your rice dal mixture  is cooked little dry, you can add some boiling water or the milk which is mentioned as optional.

5.Now take a hard bottomed pan, add melted ghee, roast the cashew-nuts golden , let the raisins also be roasted till they swell and then add the melted  jaggery to it, add the cardamom powder , and a very small pinch of edible camphor.

6.Add the cooked dal and rice mixture adjusting the consistency of Sakkarai Pongal  by adding milk.

Sakkarai pongal is typically served in a porridge like consistency.

1. Adding 2 tbsp chana dal is optional.
2. Adding little milk to the cooked dal and rice mixture is also optional, I prefer to add milk than boiling water as is usually done, when the dal rice mixture appears slightly dry.Adding milk also enhances flavour as well loosening the consistency.
3. Traditionally Sakkarai  Pongal on Pongal day is usually cooked in an open brass pot called Vengala    Paanai and just when the whole mixture comes to a boil while getting cooked, little milk is added and the pot is allowed to over flow .Little kids and adults alike shout in delight Pongalo Pongal to mark the festival s beginning and it also indicate abundance and prosperity. The word Pongal means Overflow in Tamil.
. 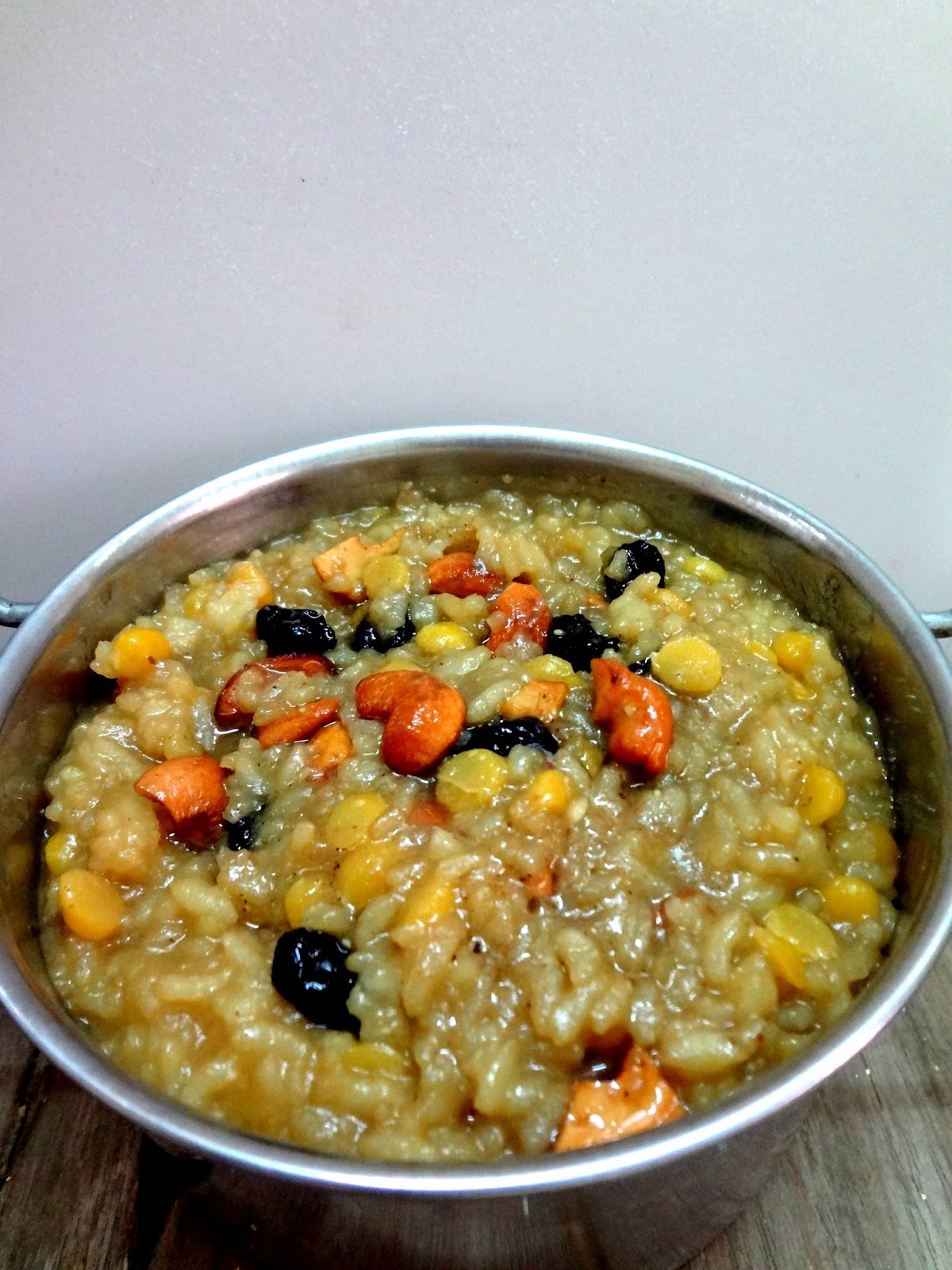