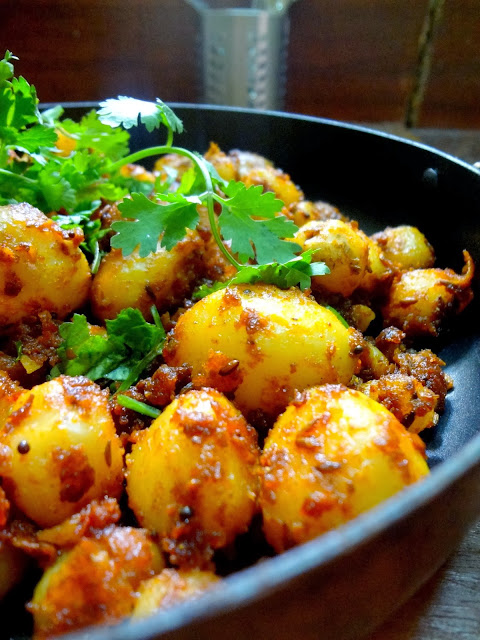 Cumin seeds are used as a spice for their distinctive flavor and aroma. It is globally popular and an essential flavoring in many cuisines, particularly South Asian, Northern African and Latin American cuisines. Cumin can be found in some cheeses, such as Leyden cheese, and in some traditional breads from France. It is commonly used in traditional Brazilian cuisine.
Cumin can be used ground or as whole seeds. It helps to add an earthy and warming feeling to food, making it a staple in certain stews and soups, as well as spiced gravies such as chili. It is also used as an ingredient in some pickles and pastries.

In Sanskrit, Cumin is known as Jiraka. Jira means “that which helps digestion". In Ayurvedic system of medicine,dried Cumin seeds are used for medicinal purposes. The dried cumin seeds are powdered and used in different forms like kashaya (decoction), arishta (fermented decoction), vati(tablet/pills), and processed with ghee (a semi-fluid clarified butter). It is used internally and sometimes for external application also. It is known for its actions like enhancing appetite, taste perception, digestion, vision, strength, and lactation. It is used to treat diseases like fever, loss of appetite, diarrhea, vomiting,  abdominal distension, edema and puerperal disorders.

Cumin's distinctive flavor and strong, warm aroma are due to its essential oil content.
Cumin seeds are pungent, potent little things with the ability to significantly change the trajectory of a dish. They are featured prominently in Mexican, Mediterranean, Indian, Middle Eastern, and certain Chinese cuisines. Back in the Middle Ages, cumin was one of the most popular – and most accessible – condiments for the spice-crazy Europeans, and stories tell of soldiers going off to war with loaves of cumin bread in their satchels for good luck.

Cumin originated in the Mediterranean, and it was used extensively by the Greeks, the Romans, the Egyptians, the Persians, and just about everyone in that region. It is not to be confused with caraway, which is actually called “cumin” in multiple European languages. They are somewhat similar in taste and appearance, but cumin is spicier and, in my opinion, tastier.
As is usually the case with spices that have been in use for thousands of years, cumin appears to provide a number of potential health benefits, from anti-glaciation agent to antioxidant to anti-osteoporotic, and much more. Source..Wiki 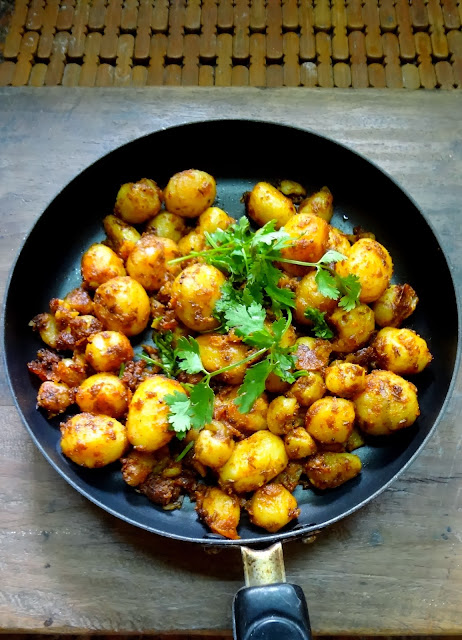 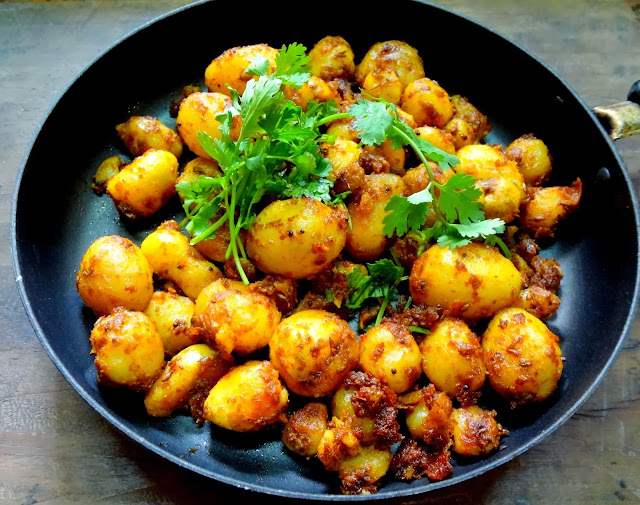 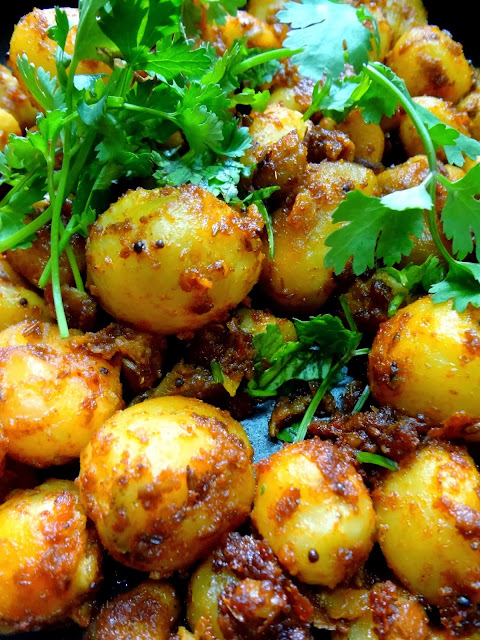 Spicy Jeera aaloo or in other words baby potatoes tossed in crushed cumin and other spices makes a great side dish for rice and rotis. One cannot emphasize the numerous brilliant ways of using potatoes and this is one of them.

Very easy to prepare and can be done in a jiffy.

Wash the baby potatoes to remove the dirt if any and pressure cook upto 2 whistles , with little water or microwave them to soften.

When cooled, peel the potatoes and keep aside.

In a skillet, heat the oil. crackle mustard seeds and  toss the 1 tsp of cumin seeds, sautee till golden and aromatic,taking care not to blacken the cumin seeds.

Sprinkle barely drops of water to help cook yet retain the crunch .Cover and cook till the potatoes appears nicely roasted and cooked dry.

This can be done well in a microwave too .

When the potatoes, appear roasted, browned and get a light crunchy exterior, you can remove from te gas and garnish with curry leaves or chopped cilantro.

This makes a terrific dish to go with rice or rotis. 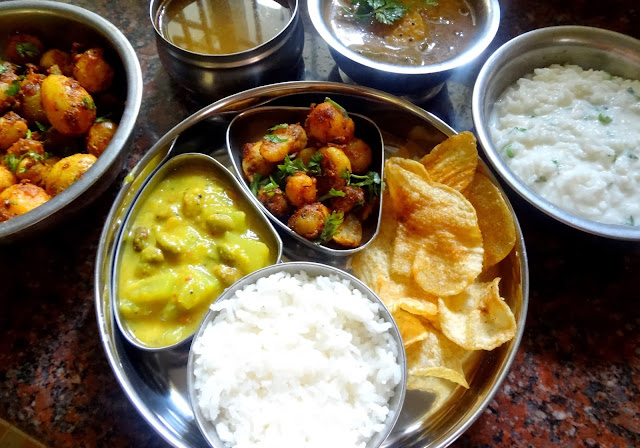 Cumin, along with ghee and a host of other spices, played a prominent role in the Ayurvedic medicinal traditions.

Cumin is a good source of Iron, Manganese, and other vitamins and minerals. Some research shows that cumin can stimulate the production of pancreatic enzymes and help digestion. One study found that cumin was protective against memory loss and the damaging effects of stress on the body.
Another study evaluated the antioxidant content of Cumin and found it more effective than other common antioxidants including Vitamin C.  Due to it’s high antioxidant content, some lab research has even found that it might have a role in fighting cancer.
Yet another study found Cumin effective in increasing insulin sensitivity, thus beneficial for diabetics. Still more research found anti-asthmatic properties in Cumin since it works as a bronchodilator and can help asthmatic patients.