Quesadillas...this is something I  wanted to share as it is an interesting way to have rotis/flour tortillas with some veggies , greens and some cheese with seasonings.

Pretty easy to make , and a great way to use left over dry sabziz, rotis too. This is nothing but a desi version of our stuffed parathas but served after slicing them after it is toasted brown on a stove top or tava.

Quesadilla is a flour tortilla or a corn tortilla filled with some vegetables or meat , cheese, other ingredients, and  then folded in half to form a half-moon shape. It is sliced to smaller pieces while serving.

This dish originated in Mexico, and the name is derived from tortilla and the Spanish word for cheese queso.

They are usually cooked without the addition of any oil. Quesadillas are served with green or red salsa, chopped onion, guacamole, and Mexican sour cream.
Making quesadillas is  very easy.

All you have to do is to. warm a tortilla  or a roti as I have done in a skillet and layer with grated mozzarella  and simple  fillings. Be patient and keep the gas flame on very low, you don’t want to scorch the tortillas, until everything , especially the cheese is warm and gooey, then fold and slice..

use only a little bit of butter or oil in the pan when making the  quesadillas.  A little too much oil or butter will make it soggy and greasy instead of  crispy. Half a  teaspoon  should do the trick.  To get the  a crispy golden  quesadilla just  coat the bottom of the pan .

You need to keep adjusting the flame too .Keep it simple with the fillings. Use  just a few simple veggies and   ingredients and only use about ½   to ¾ cup or so per quesadilla.

A quesadilla is  only a medium  for whatever combinations of ingredients you wish to add. So play around but don’t go overboard with the fillings. 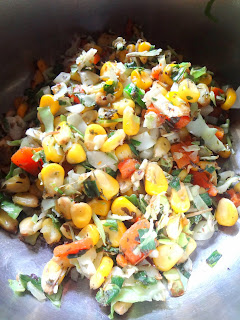 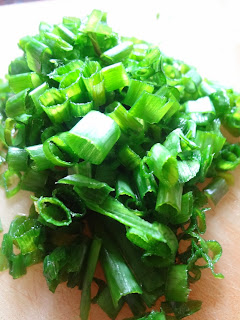 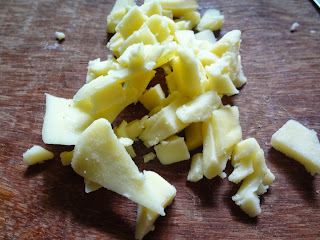 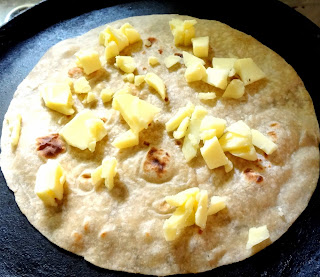 Warm the tortilla/roti on a heated skillet with a tsp of oil smeared all over the pan. Sprinkle the grated cheese all over. 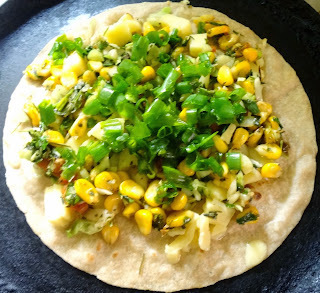 Sprinkle the filling  all over the tortilla. 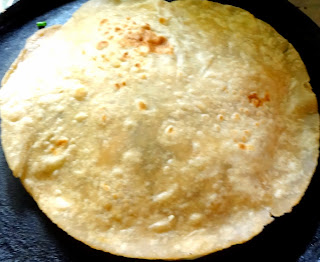 Sprinkle more cheese on top of filings and place another tortilla on top and press lightly with a spatula. Then flip over on the other side just when the cheese has started melting and the fillings remain in place.

Make slice of the Quesadillas and serve with salsa or sour cream. 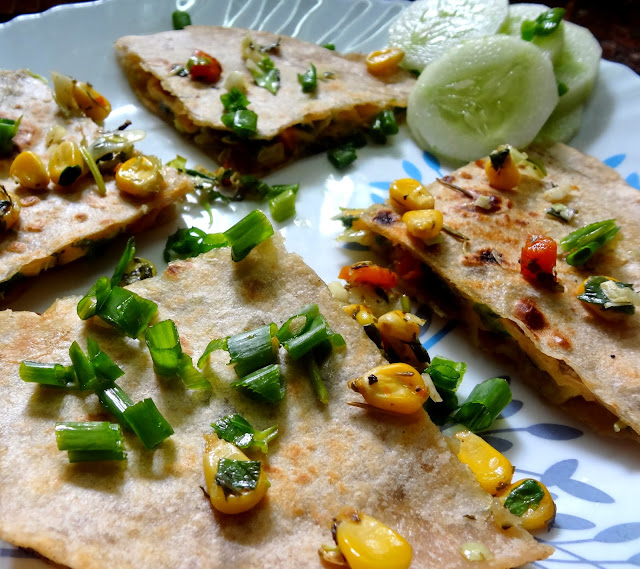 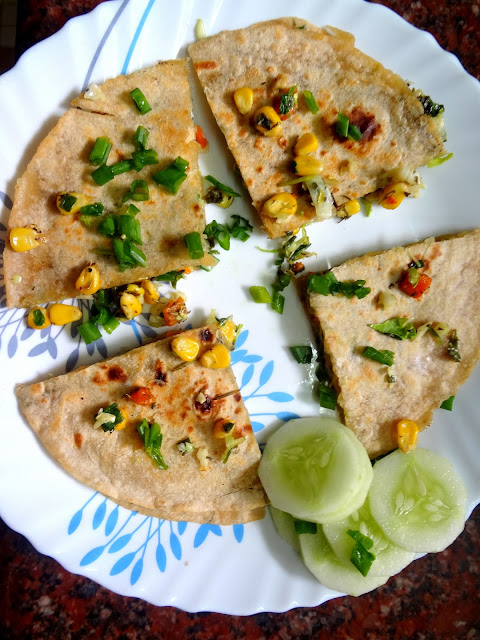 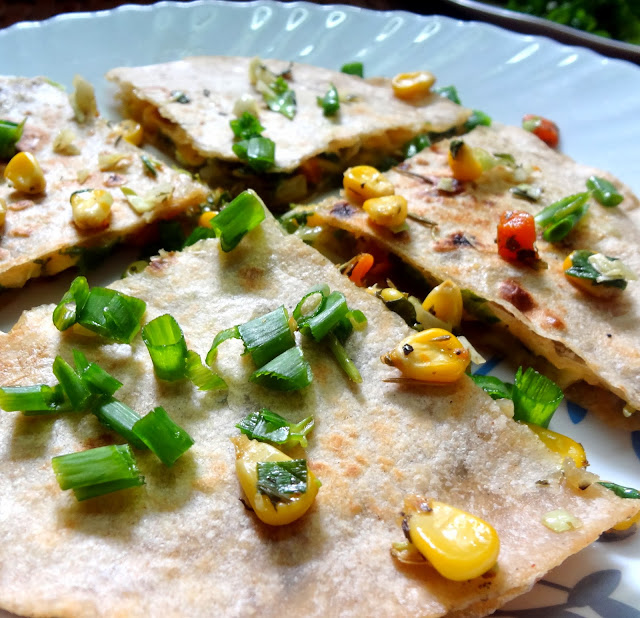 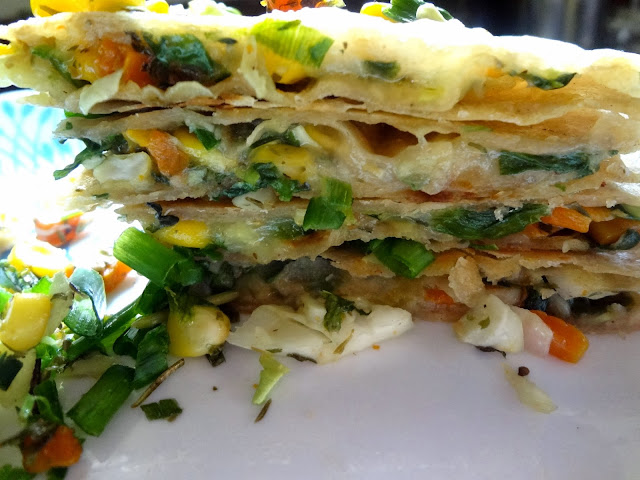 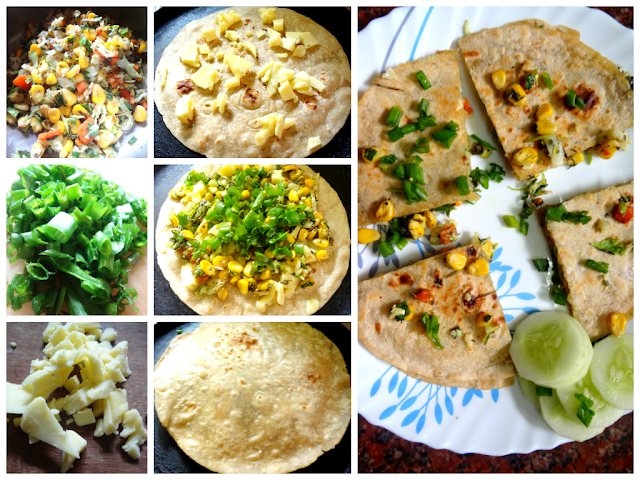 ½ cup cooked corn  ( if using shelled corn otherwise you can use grated corn from the cob directly. Easy to handle too).

3 tbsp grated mozzarella , reduce the cheese if you wish.

First make a dry filling ready by lightly sautéing all ingredients given under the heading, all the greens, corn , salt with all the spices and a tsp of oil. Till they appear little cooked but not mushy. You don’t want a soggy quesadilla. Don’t use cheese in this filling now.

Within seconds the cheese starts melting and the fillings remain in place and then carefully flip over both the rotis/tortillas with the filling inside together , the  fillings will not spill out now  as the cheese would have spread and melted  and all the ingredients would be holding together on account of the melted cheese.

When both sides appear nicely browned and crisp , switch off the flame and let cool before you slice it .

Another way is to place the tortilla/roti on the heated pan, place the fillings and cheese on one half of the tortilla and then when it gets warmed up , just fold the tortilla and press lightly witha spatula and flip on both sided till browned and crisp , like a half moon shae.

Slice further in  half and serve.

In order to get nice crisp quesadillas, you need to smear just a drop of oil on the pan and then toast the roti./tortilla first, they start getting firm and brown, the n place the ingredients.

The flame has to be kept on low all the time otherwise you will scorch the rotis even before the cheese has melted.

I have used already cooked rotis so it was done within minutes.