It gives me great pleasure to post this simple delicious recipe of Mysore Paak , as it is my 151 th   post today and amazingly it was not a planned one, it just  coincided,  as am posting a few recipes for the upcoming  Diwali festival and looking for  posting some  simple basic sweet recipes.

Am happy the post happened to be one of my family favourites , the Mysore Paak .

Mysore paak is a sweet dish famous in Karnataka , made of gram four, generous amounts of ghee and sugar.Pak or paka in Kannada means the sugar syrup.

Almost everyone prepares this simple sweet. Sounds simple but believe me this can be a nerve wracking experience to new comers who  may miss out some essential steps and end up having a Mysore Halva  instead of Mysore Paak. Paak in Kannada a means a hardened sugar syrup.

Some history about Mysore Paak.

This incredibly sweet dish was first created in the kitchens of Mysore palace.

Legend is that Mysore pak was first created in the kitchens of the Mysore Palace by a palace cook named Kakasura Madappa out of the above ingredients. The cook at the Mysore Palace kitchen simply made a concoction of besan/gram flour , ghee and sugar.

The sweet that was formed delighted the royalties so much that it became a "Royal Sweet". When asked its name, Madappa obviously didn't have its name, so he simply called it the ‘Mysore pak’, a delicacy from the Mysore Palace.

The king relished the sweet so much that he got Madappa to set up shop outside the palace grounds so that it could be made available to common people.


Now to the recipe.

1. First mix the gram flour with a little ghee and rub well with both palms to coat the flour well with the ghee.
2. Sieve the ghee coated flour well to remove the lumps. Dont skip this step.

Keep a greased plate or tin ready. Dont do it at the end as you will have no time to do that .

3. Prepare the sugar syrup in a very heavy bottomed non stick pan with little water just about enough to covet the sugar.

4. At the same time in the other gas burner, keep the ghee oil mixture in another pan to heat well, and keep the  flame on low as the oil must remain very hot till the whole process is over. Dont miss this step also.

5. When the sugar syrup is getting ready, test it for one string consistency, it will keep bubbling, take a drop and test in water by dropping to check for a smooth ball consistency.

Another way is to take a drop of hot syrup with one finger and thumb and see whether the string forms and it  is sticky.

If you are not able to handle the heat, then another way is to drop the syrup on a plate and as soon it touches, on exposure to air, the drop will harden and when you place a finger on it and pull away, a string will come this is the consistency we want.,

This step is crucial and dont be hasty , otherwise you will have a halva instead of a paak.

6. Now the most important step, to put the gram flour in the hot sugar syrup slowly little by little all the while stirring with one hand in round circular movements while tipping the flour with another hand.

Note at this stage the flour beginning to appear shiny, cooking in the hot syrup, then starts frothing a bit. When all the flour is used up and cooking to form little bubbles,   it is time to add the hot  ghee oil mixture with another hand,  ladle by ladle all over the mixture and you will see it sizzling as it touches  the hot flour syrup mixture.

See at  this stage the gram  flour is getting fried in the hot oil and cooked in the sugar syrup at the same time and the raw smell of flour disappears and a fine roasted aroma beginning to be released, this is the first stage of the Mysore Paak getting ready.

Dont leave the round stirring circular movement and keep adding the oil ghee mixture  ladle by ladle and , do not increase e the flame too. As soon as you  finish using up all the oil , or little bit may be left over, the mixture froths a lot and lots of bubbles appearing in the mixture.

The most important last step now is to keep brisk movement and pour the whole mixture swiftly in one quick movement on to the grease plate or square tin.

As soon  as the Mysore paak mixture hits the greased plate it cools rapidly, starts hardening, dont waste time and quickly smooth-en the top and the when little firm , make the marks to cut into pieces with knife.

After the mixture cools ,  Mysore paak  becomes hard on the plate you  can  cut  them into pieces easily., by just breaking off from the marks made previously.

1. Do not skip the step of mixing the gram flour with melted ghee in the first step.

2. You must sieve the ghee mixed gram flour to remove the small balls of lump to avoid making lumpy Mysore paak.

3. While the sugar syrup is getting ready , the ghee oil mixture to remain hot in the other gas burner.

Do not add all the gram flour in the sugar syrup in one go.

4. Do not leave the hand from stirring briskly i round circular movements when the flour is being tipped in the hot sugar syrup.

5. When all the flour is used up, immediately start adding the hot ghee oil mixture ladle by ladle in round movements to enable the gram flour mixture to get roasted in the oil and also cooked the sugar syrup

7. To check whether the Mysore paak consistency is ready,  look for the mixture leaving hard flaky scraps on the edges of the pan , and appearing hard, which means your Mysore paak is almost ready, the darkening of the mixture  will also indicate the end of the process.

8. The hot Mysore Paak mixture must be poured on the greased plate in one single swift motion as it  will start hardening as soon as it hits the greased pale and these last few seconds are very important, start smoothing the top and quickly spreading.

10. Use a whisk to get a smooth mixture than a spatula.

11. Last but not the least, while you are transferring the hot mixture onto the greased plate, dont keep scraping off every bit from the hot pan , instead concentrate on the greased tin and ensure it has been spread evenly in the tin to. get uniform pieces.

12. The few seconds while you are stirring the hot gram flour, sugar syrup and the pouring of hot oil on the mixture is going , ignore all interruptions, door bells, or phone calls.

13. This is the vital few seconds that will determine the perfect making of Mysore Paak.

14. Dont get intimidated by the long explanations in the notes , this will help new comers, beginners to bear in mind.
15. First timers can start with one cup and proportionate measurements of the ingredients and get a successful outcome.

16. Unlike baking, making Mysore Paak is actually very easy if you keep these simple tips in mind and dont avoid making  this, because even with some mistakes, you can still have a delicious tasty Mysore paak  or Mysore halva! It is very tasty both ways and you can always tell others you made a besan halva!!

The pics below will give some idea of the steps , as much as possible. 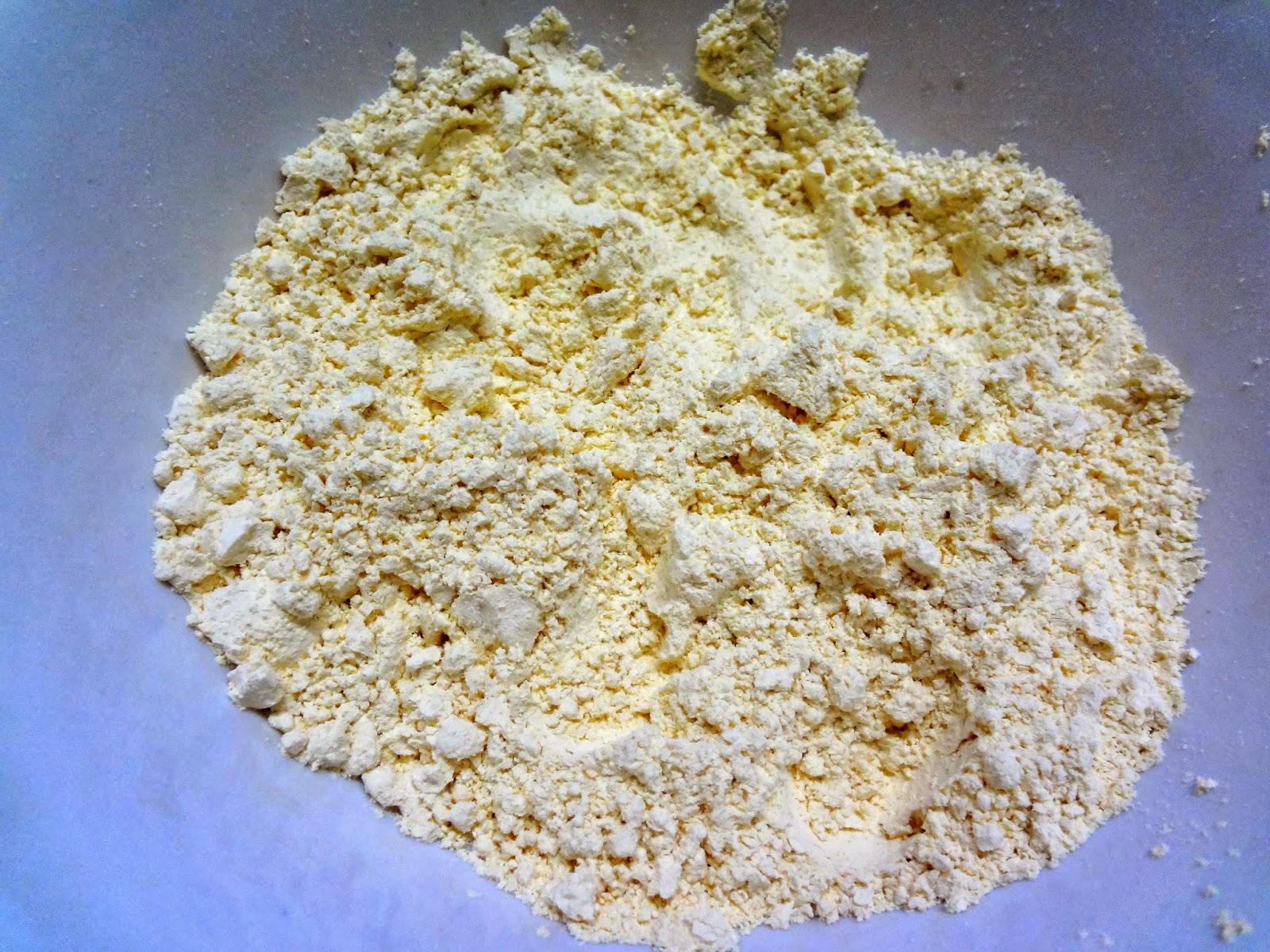 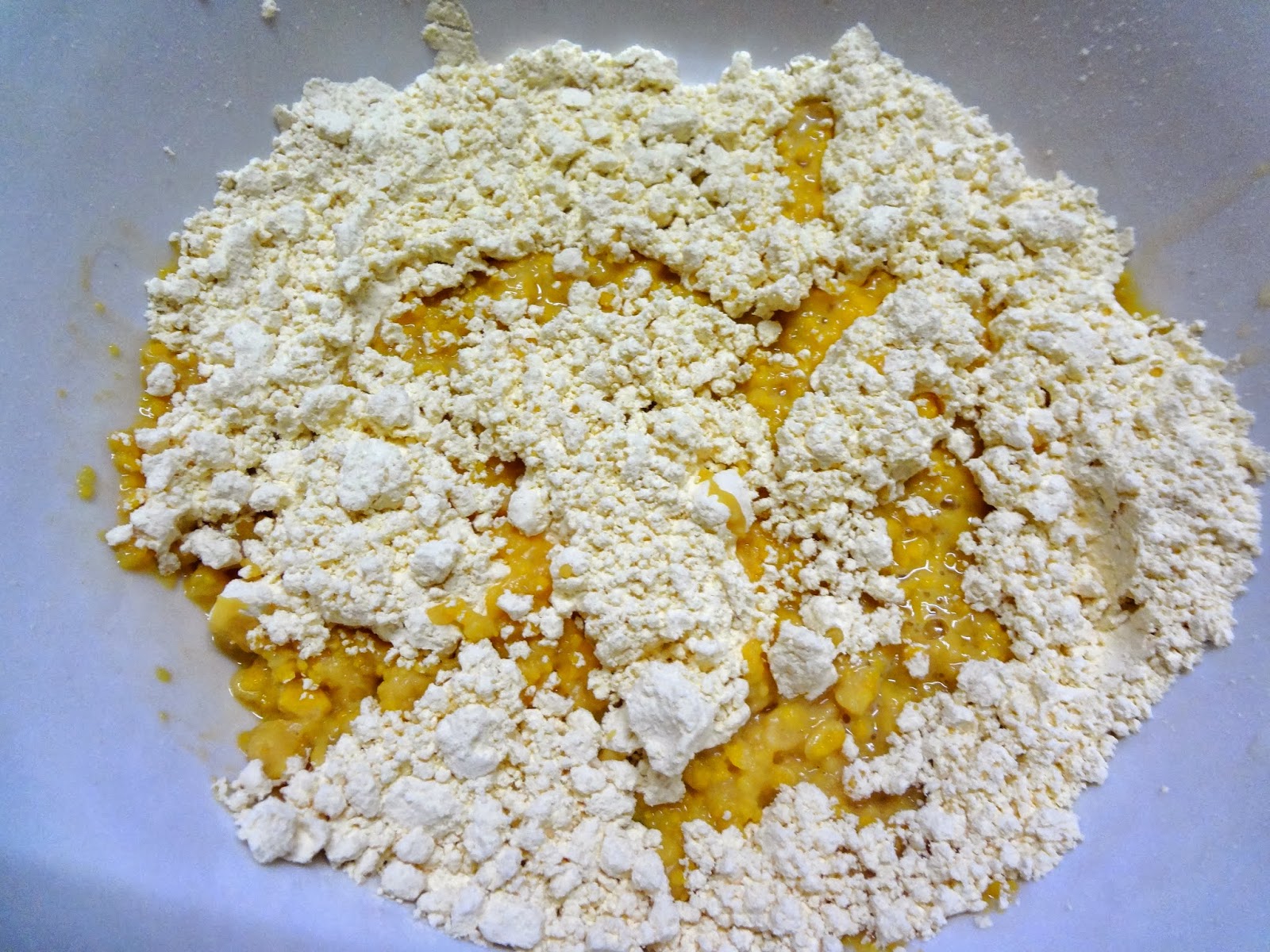 After the flour is sieved well , it appear fine and powdery. 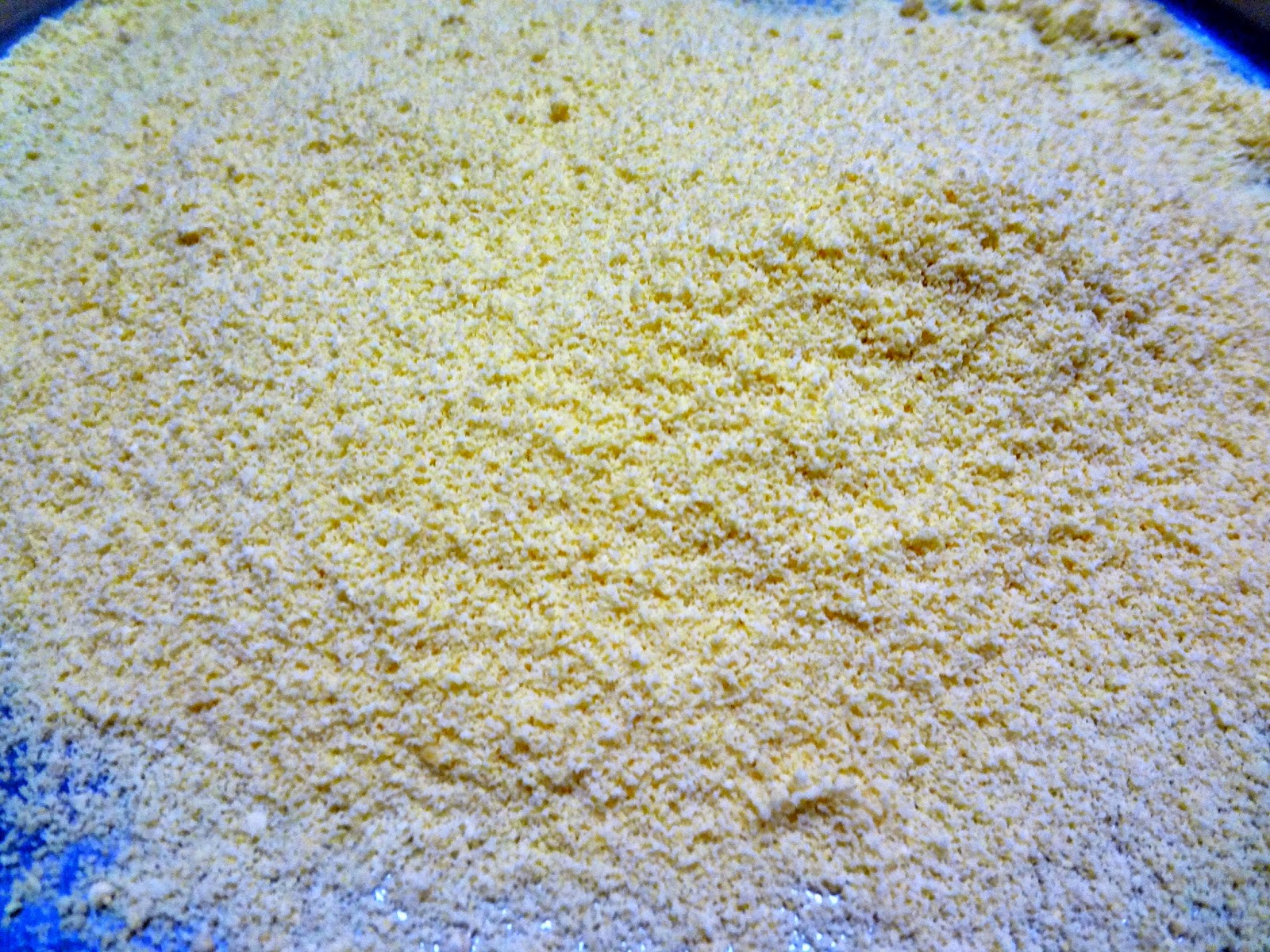 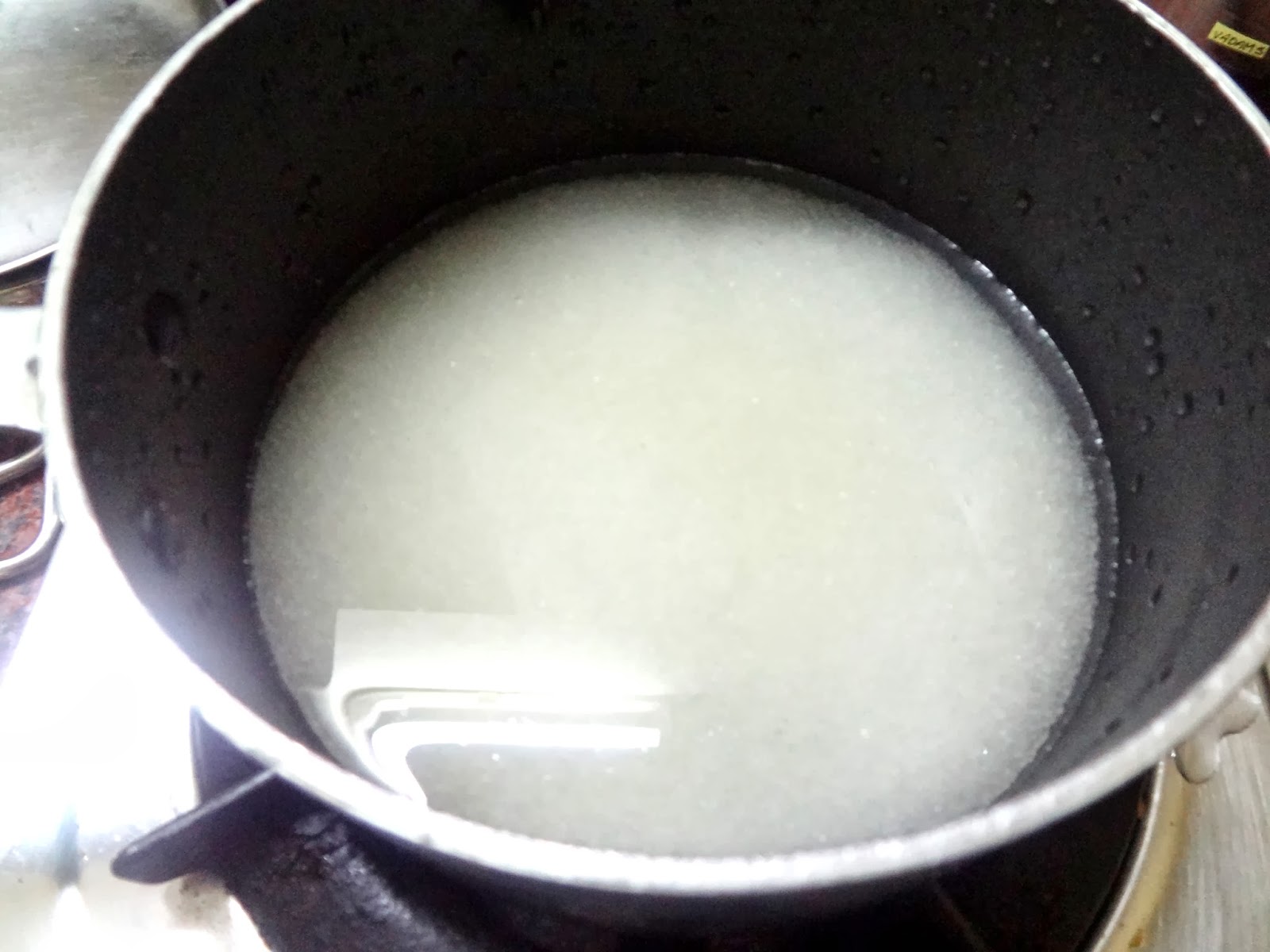 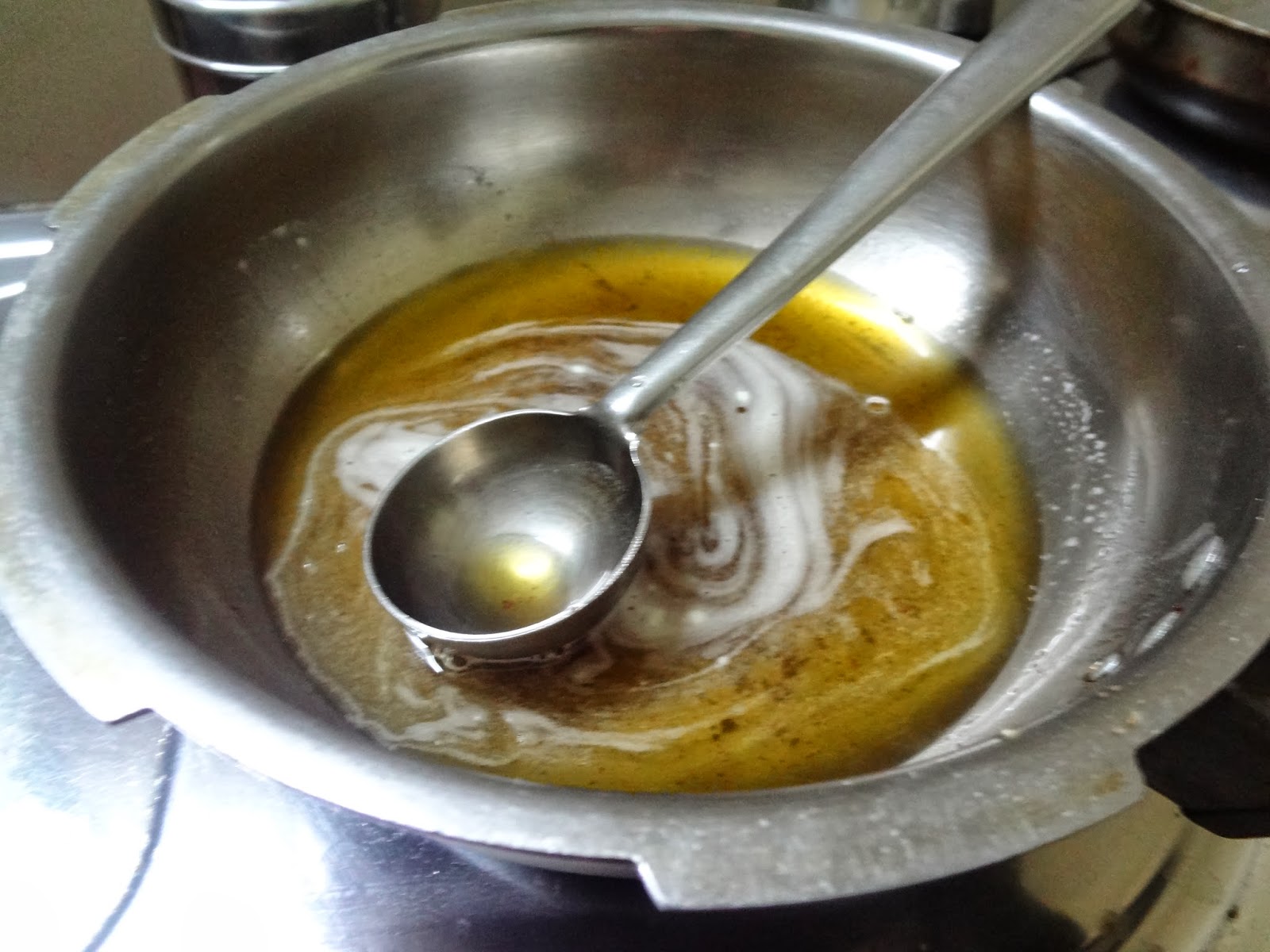 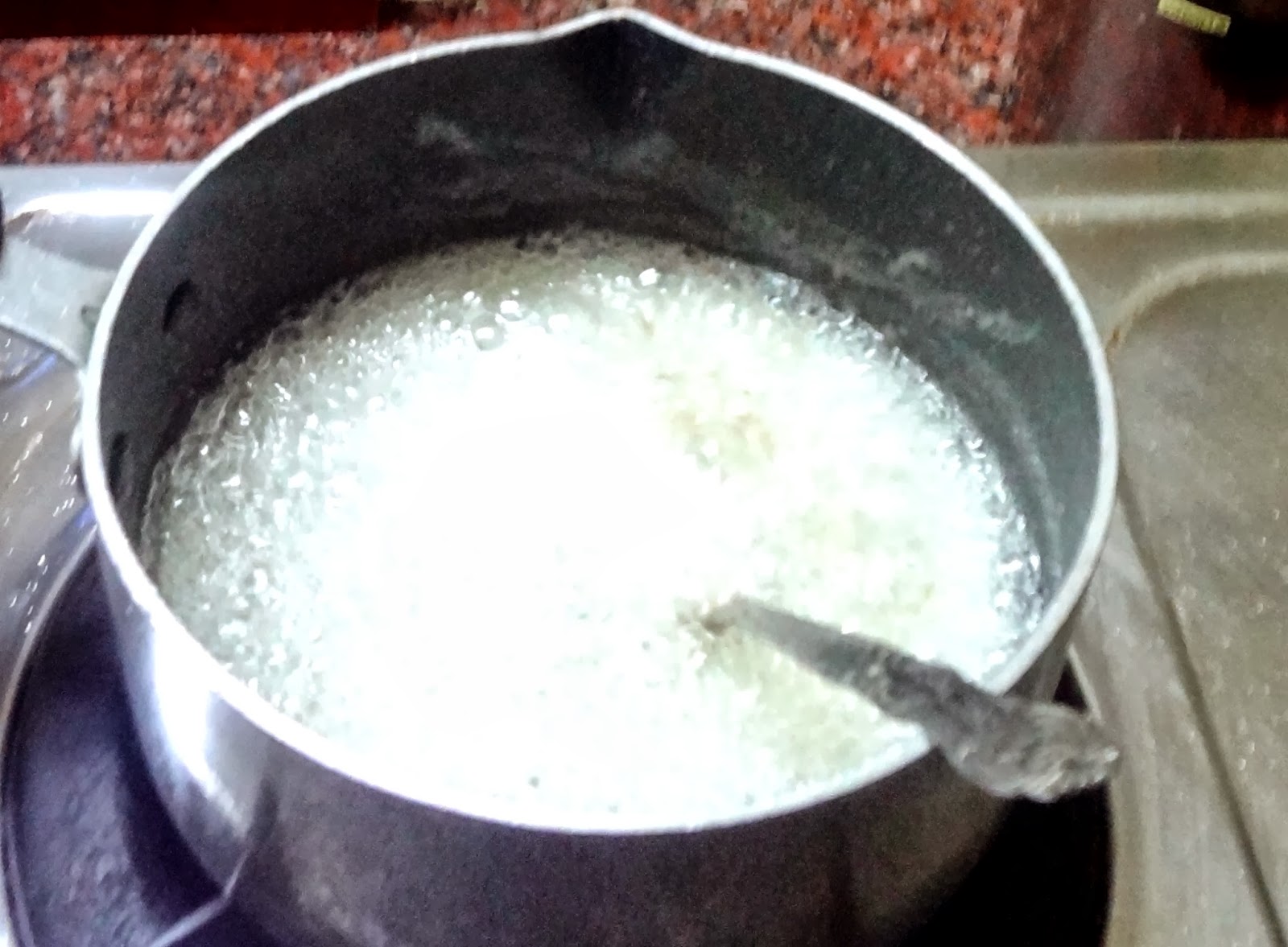 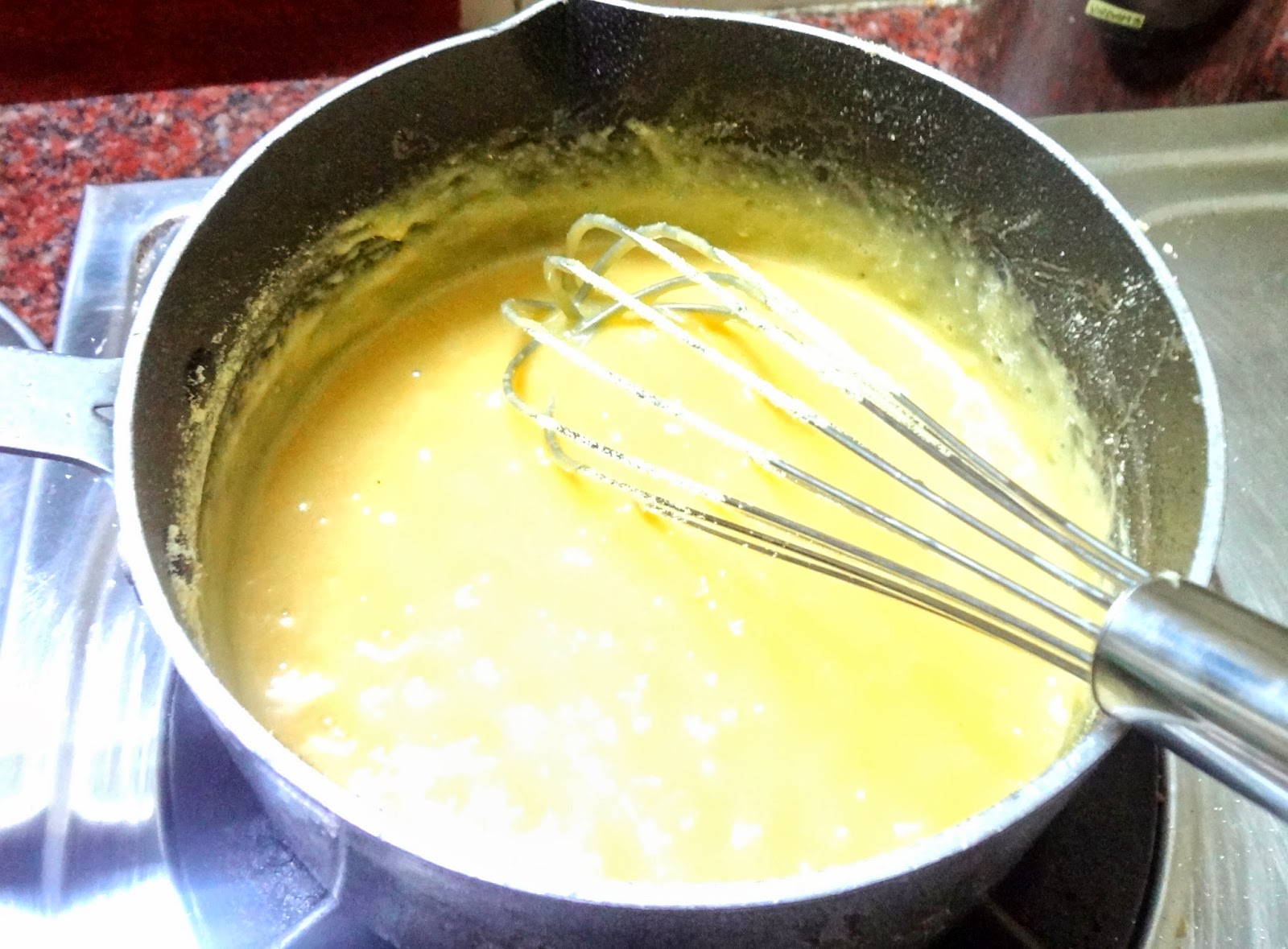 After adding the gram flour to the syrup, it wil appear like a molten lava. 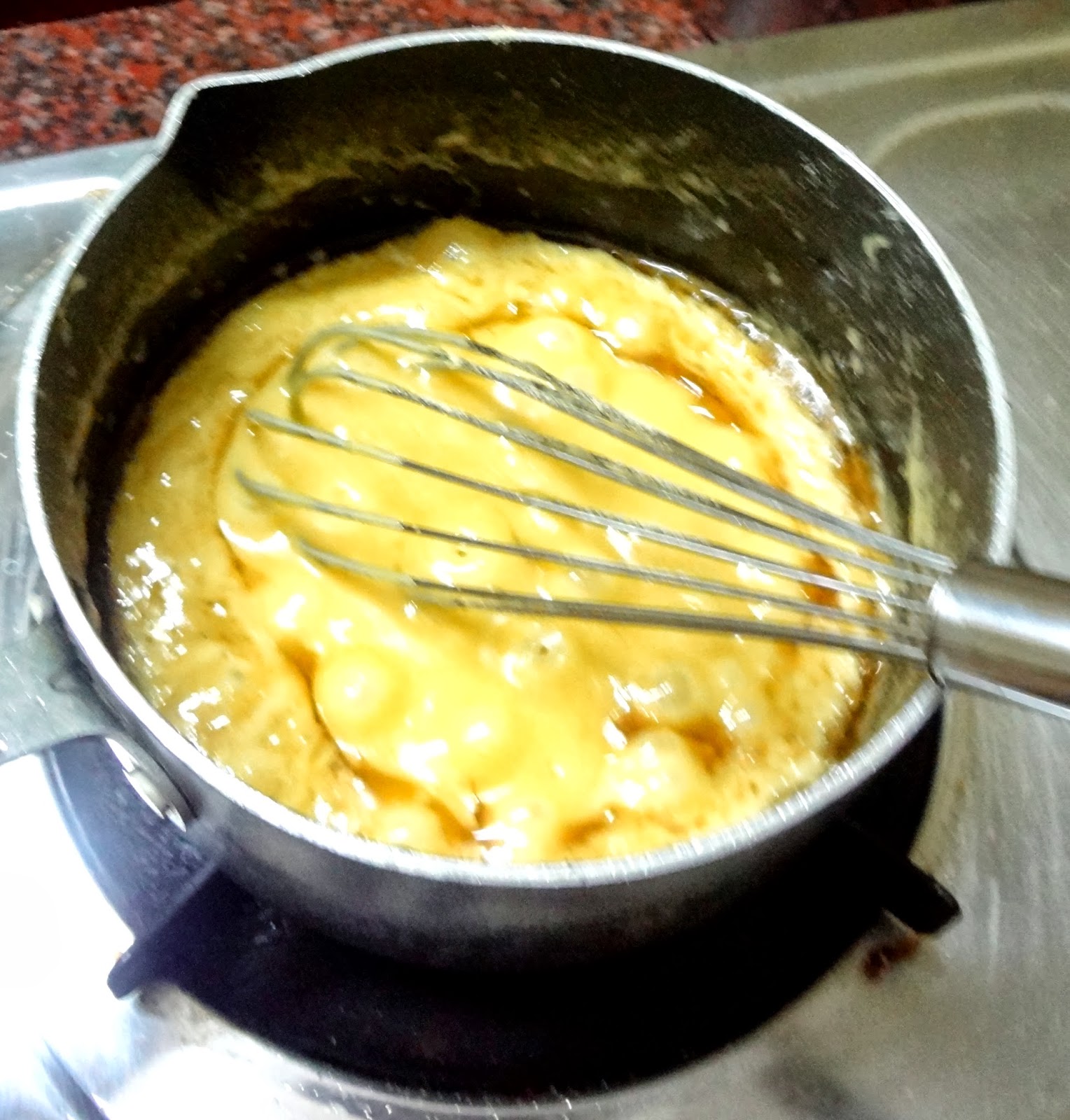 When the hot oil is being poured by the ladle ful , it appears frothy and bubbling. 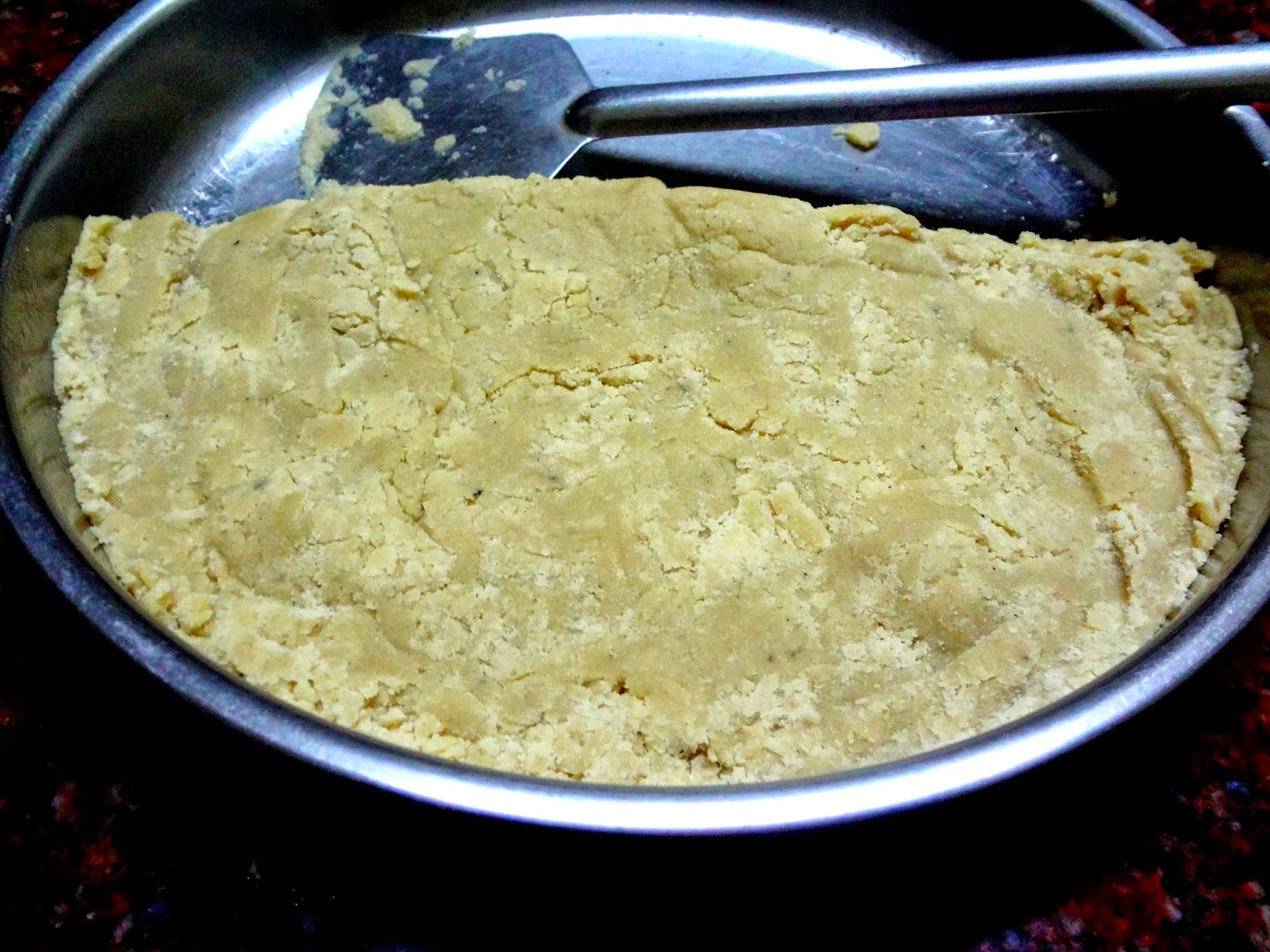 When the mixture is poured on the greased p[late the top part gets dry and hard immediately. 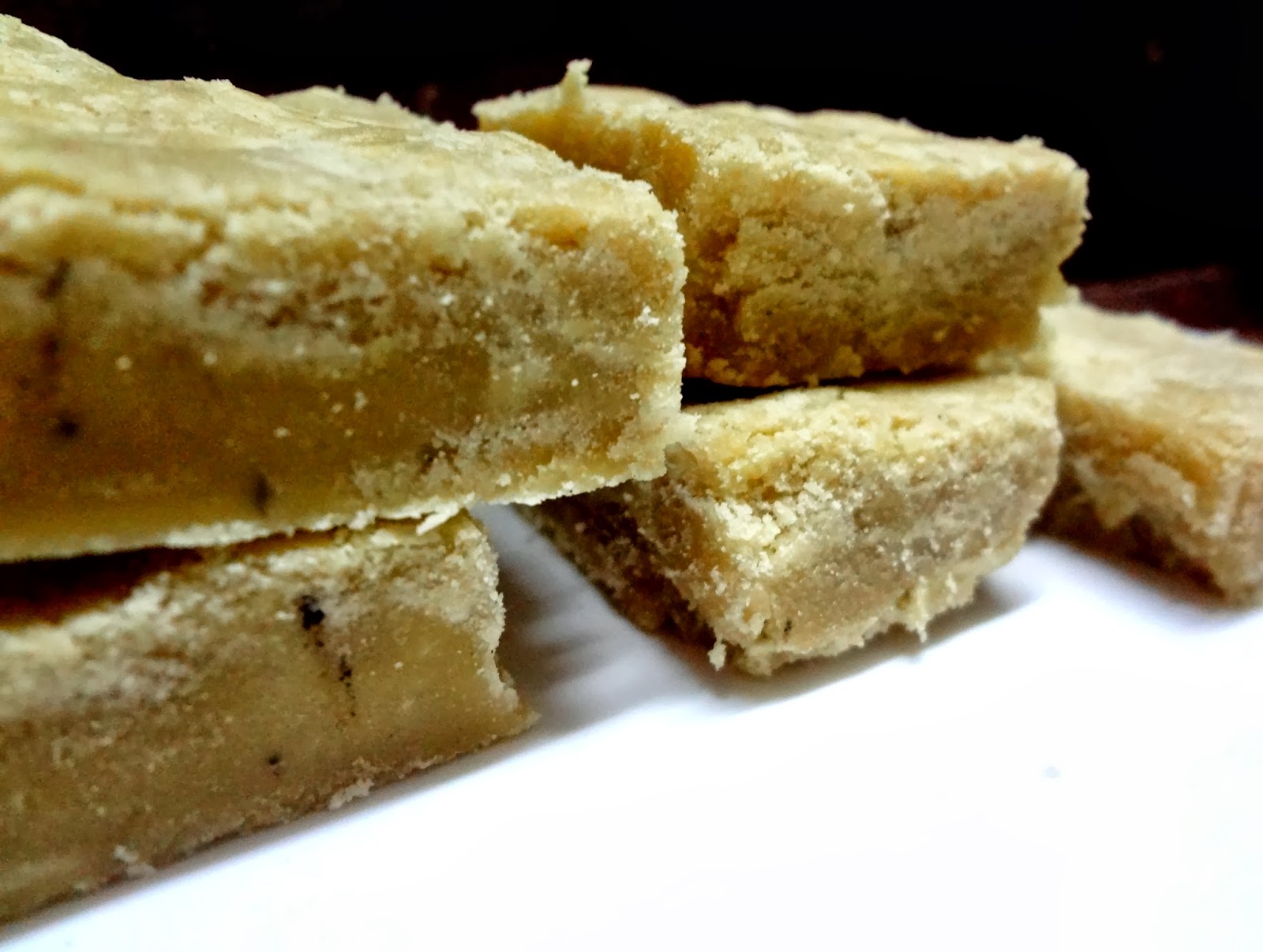 The top and bottom parts of the Mysore paak appears little pale while the center part looks darker and porous as both the top and bottom parts will cool quickly , whereas the center part of the Mysore paak keep s cooking even when it is poured on the greased plate and gets the porous texture , which is how we like it rather than the smooth and halva like taste of eh krishna sweets Mysore Paak, which is no doubt delicious but it dissolves too quickly. 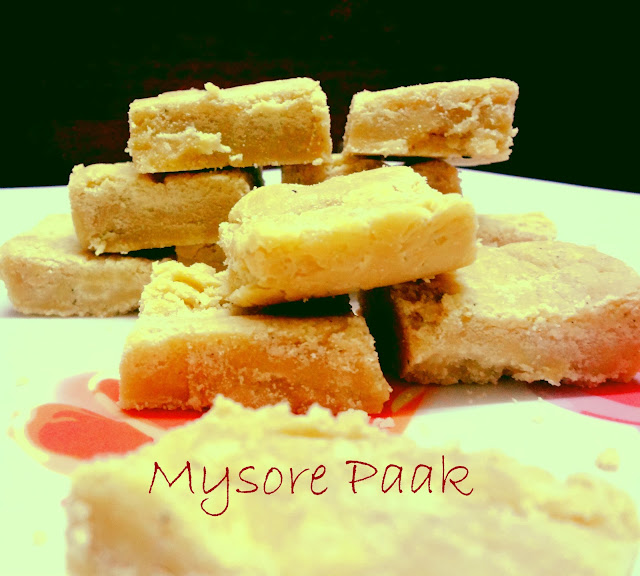 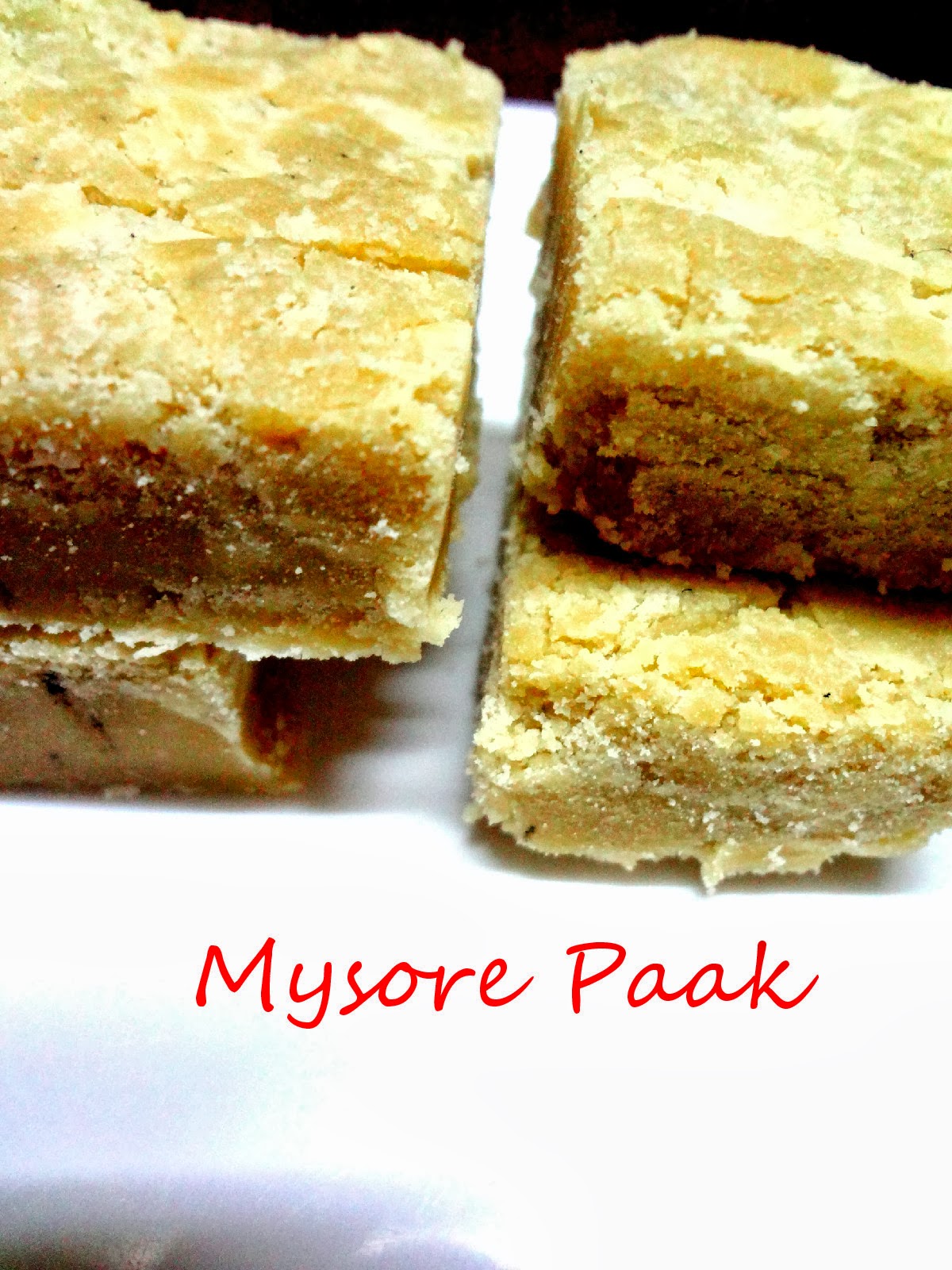