Some recipes for Onam

I have a huge mammoth task of trying to write down the recipes for Onam festival, a celebration close to my heart for the simple reason my mom would faithfully follow the traditions hailing from Palakkad.

When we were kids, we had so many festivals to keep count of both from Tamilnadu and Kerala , importantly Onam and Vishu . This is my humble effort to recreate those tasty dishes from my home and cannot claim they are the ultimate authentic ones as only Keralites can give that special touch I guess.

The most wonderful part of the Onam festival is no doubt the phenomenal banana leaf meal called Onasadya., an elaborate affair with a gastronomic delight . The other parts of the festival, the elaborate flower arrangements, the finery, jewelry, boat races, the beautiful kasavu saree clad women , which has now taken the fashion capitals by the storm. Such is the enchantment of the festival.

This blog being a fledgling, I can manage to recreate a select few dishes from the sadya which we prepare often at home and am most comfortable with. No  doubt the banana leaf meal is overwhelming in size, the no of dishes going upto 30 and more , but the recipes are simple, flavorful, and it is a wonder to see how people actually finish the leaf. This happens once a year and most looked forward to by the rich and poor alike.

More about the Onasadya

Onasadhya  unarguably is the most delicious part of the grand festival .  It is considered to be the most elaborate and grand meal prepared by any civilisation or cultures in the world. It's a feast which if enjoyed once is relished for years.

Onasadhya is prepared on the last day of Onam, called Thiruonam. People of Kerala wish to depict that they are happy and prosperous to their dear King Mahabali whose spirit is said to visit Kerala at the time of Onam.

Legend goes that Mahabali who was so attached to his people that he requested Gods to allow him to visit Kerala every year. People of Kerala wish to convey that they are enjoying the same age of prosperity as was witnessed during the reign of King Mahabali by preparing a grand Onasadhya.

Rich and the poor, everybody prepares Onasadya in a grand fashion as people of Kerala are extremely devotional and passionate when it comes to Onasadya. So much so that, it has lead to saying, 'Kaanam Vittum Onam Unnanam'. Meaning - men go to the extent of selling all their possessions for one Onam Sathya.

Rice is the essential ingredient of this Nine Course Strictly Vegetarian Meals. All together there are 11 essential dishes which have to prepared for Onasadya. Number of dishes may at times also go upto 13. Onasadya is so elaborate a meal that it is called meals, even though it is consumed in one sitting. Onasadya is consumed with hands, there is no concept of spoon or forks here.

Fruits and digestives are also part of the meal.

The food has to be served on a tender Banana leaf, laid with the end to the left. The meal is traditionally served on a mat laid on the floor.

A strict order of serving the dishes one after the another is obeyed. Besides, there are clear directions as to what will be served in which part of the banana leaf.

Earlier in the old days there were about 64 mandatory dishes . At that time three banana leaves were served one under the other to accommodate all the dishes.

How exactly they were accommodated in the tummy..is a food for thought!

There is a distinct order of serving the the grand feast of Onam. Pappad or Pappadum is to be served on the extreme left. On top of the big pappadum banana is served. The banana can be 'Rasakadali', 'Poovan', 'Palayankodan'. From the right pappad - salt, banana wafers, sarkarapuratti fries are served. After this, ginger lime and mango pickles are served. Next comes 'vellarika', 'pavakka', beetroot and 'ullikitchadi'. 'Kitchadi' made of pineapple and banana splits or of grapes and apple is served along with this. On the right, 'cabbage thoran' is served. Then comes a thoran made of beans and avial followed by  green peas mix 'thoran'. The meal will be complete with the 'avial' and 'kootu curry'.

Rice is served when the guests seat themselves and just two big spoons is considered enough. After this 'parippu' and ghee is poured. Then comes Sambhar. Desserts are to begin with adaprathaman followed by 'Kadala Payasam'. This colourful arrangement on the lush green banana leaf makes the food look even more tempting and irresistible .


Some of the dishes prepared and served

This is either prepared from pumpkins/red beans or from yam and raw bananas cubes. The spices used in this include split green chillies, ground coconut, cumin seeds, turmeric and red chillies. Erissery is seasoned with mustard seeds spluttered in oil. This is a main stay for the occasion, though not very popular these days.

This is prepared from buttermilk. Ingredients consist of sliced plantains called nenthra-kaya and yams or chena. These are boiled in water with salt and chillies. It is flavoured with ground coconut and mustard seeds spluttered in oil. Some even add cucumber cubes to Kalan.

Olan is prepared from sliced cucumber and brinjal. Sometimes pulse is also added. They are boiled in water with salt and no chillies. When properly boiled, some fresh coconut oil is poured. The dish is seasoned with flavour kariveppila (curry leaves).

This is kind of a mixed vegetable as all sorts of available vegetables are added to it. All vegetables are first boiled in water with salt and chillies. Tamarind and well ground pulp are added at proper time. Aviyal is flavoured with coconut oil and Kariveppila.

Thoran is prepared by slicing beetroot and several other vegetables into very small pieces. These are then boiled in water with some salt and chillies till all the water dries up. Water can also be strained away. For seasoning, ground coconut pulp and mustard fried in coconut oil is used.

This resembles olan. It is a special Onam delicacy from the state of Kerala and has been recently added to Onam Sadhya.

This is a curry consisting of a variety of vegetables and some Bengal gram. It differs from Aviyal as it does not contain tamarind.

This is an extremely popular recipe from South India and relished by the whole of India. It consists of dal and a variety of vegetables like brinjal, drum-sticks, pavakkai (bitter gourd), etc. All vegetables are first boiled in water with salt and chilies. Tamarind is also added to enhance the taste. Other spices like coriander, cumin seed etc. are fried in oil and powdered. Sambhar is flavoured with mustard seeds and asafoetida.

These are types of curry consisting chiefly of cucumber, mustard and sour butter milk or curds.

This lip smacking recipe is prepared from tomatoes treated with tamarind juice. It is seasoned with bay leaves and mustard seeds spluttered in oil. Some people take rasam with rice. Rasam also helps in digestion.


Payasam called 'Pal Payasam' in which rice is boiled with milk and sweetened with sugar.

There is a whole variety of Prathamans such as ata, pazham, parippu and palata prathamans.

A special HERBAL  drink is prepared for Onam in which water is boiled with a combination of cumin and dried ginger (chukku). This is beneficial from health point of view.

These are prepared well in advance of Onasadhya. Pickles are  made from mango, lemon, ginger, chillies and curry naranga.

These are prepared from black grams and are fried in oil. Pappadams are usually served in three sizes - small, medium and large.

Plantain fruits of various kinds are served  at meals

The Onam sadya is incomplete without this dish and there are two types, on is  the slightly runnier version which is poured with rice and eaten and the kurrukku kaalan is the thicker  concentrated one. 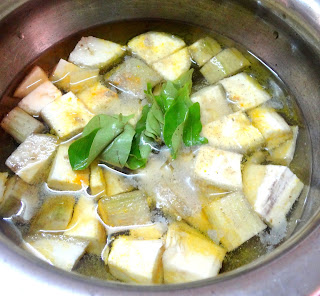 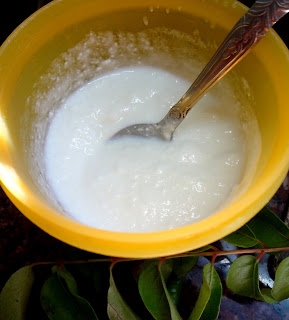 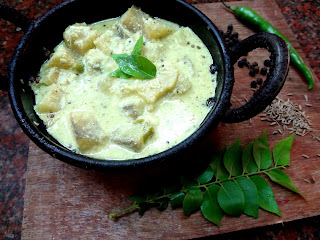 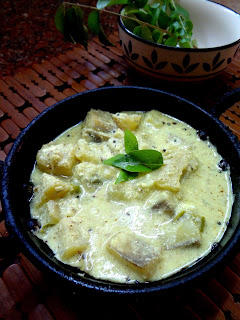 First cook the vegetables with a pinch of turmeric powder, salt in little water and add some curry leave s too.

Grind the  grated coconut  with the green chilli and cumin seeds. Get a little coarse paste, add little yogurt to help grinding.

Keep the yogurt whisked without adding water.
When the vegetables are cooked to soft , add the ground paste and the whisked yogurt.

Let it simmer on a very ow flame till the gravy comes together. Dont cook for long after adding the coconut paste.

Remove from the flame. Prepare the seasoning with mustard seeds by spluttering them in hot coconut oil, add the fenugreek powder at this stage, pour the seasoning into the  kaalan. and garnish with curry leaves.

Serve hot with plain rice as a side dish.
Normal kaalan will be of thinner consistency and can be mixed with rice.