For quite some time now we have been using chayote or chow chow as it is known here in India for almost everyday cooking in different ways. One of the most preferred form is in the gravy , or kootu which is used to mix rice with and have with some crispies or also as a side dish for chapatis.

As this is a vegetable with no particular taste, we need to make it interesting by using some spice, flavors and  giving some aromatic textures.


Chayote is also popular in South Indian cuisine. It is popularly referred to as "Bangalore brinjal", called in Kannada as "seeme badanekai" - brinjal/eggplant/aubergine of the plateau. It is used in vegetable stews like sambar and palya.
In TamilNadu in South India, it is known as "Chuw Chuw" and widely used in everyday cooking for "Saambar" or "Kootu". In Andhra Pradesh it is called Bengaluru vankaya and sold in vegetable markets in the name of "chow chow".

Let us know more about this chayote for those interested.

The chayote (Sechium edule), is an edible plant belonging to the gourd family Cucurbitaceae, along with melons,cucumbers and squash.
Chayote is originally native to Mexico or Central America where it grows abundantly and has little commercial value, and it has been introduced as a crop all over Latin America, and worldwide. The main growing regions are Brazil, Costa Rica and Veracruz, Mexico. Costa Rican chayotes are predominantly exported to theEuropean Union, whereas Veracruz is the main exporter of chayotes to the United States.
The word chayote is a Spanish derivative of the Nahuatl word chayohtli . Chayote was one of the many foods introduced to Europe by early explorers, who brought back a wide assortment of botanical samples. The Age of Conquest also spread the plant south from Mexico, ultimately causing it to be integrated into the cuisine of many other Latin American nations.
The chayote fruit is used in mostly cooked forms. When cooked, chayote is usually handled like summer squash. Though rare and often regarded as especially unpalatable and tough in texture, raw chayote may be added to salads or salsas, most often marinated with lemon or lime juice. Whether raw or cooked, chayote is a good source of amino acids and vitamin C.
Although most people are familiar only with the fruit as being edible, the root, stem, seeds and leaves are as well. The tubers of the plant are eaten like potatoes and other root vegetables, while the shoots and leaves are often consumed in salads and stir fries, especially in Asia.


It is commonly served with seasonings (e.g. salt, butter and pepper in Australia) or in a dish with other vegetables and/or flavorings. It can also be boiled, stuffed, mashed, baked, fried, or pickled in escabeche sauce.

Both fruit and seed are rich in amino acids and vitamin C.. Fresh green fruit are firm and without brown spots or signs of sprouting. Smaller ones are more tender.
The tuberous part of the root is starchy and eaten like a yam (can be fried). It can be used as pig or cattle fodder, as well.
The leaves and fruit have diuretic, cardiovascular and anti-inflammatory properties, and a tea made from the leaves has been used in the treatment ofarteriosclerosis and hypertension, and to dissolve kidney stones.

Chayote is an important part of traditional diets across Mesoamerica, and can be found in a variety of dishes.
In the Philippines, the plant is known as "Sayote" and is grown mostly on Mountainous part of the country such as Baguio City and parts of Cordillera Administrative Region. Chayote is used in many kinds of dishes such as soup, stir-fried vegetables and chop suey.
In Brazil and other Latin American countries, it is breaded and fried, or used cooked in salads, soups and soufflés. 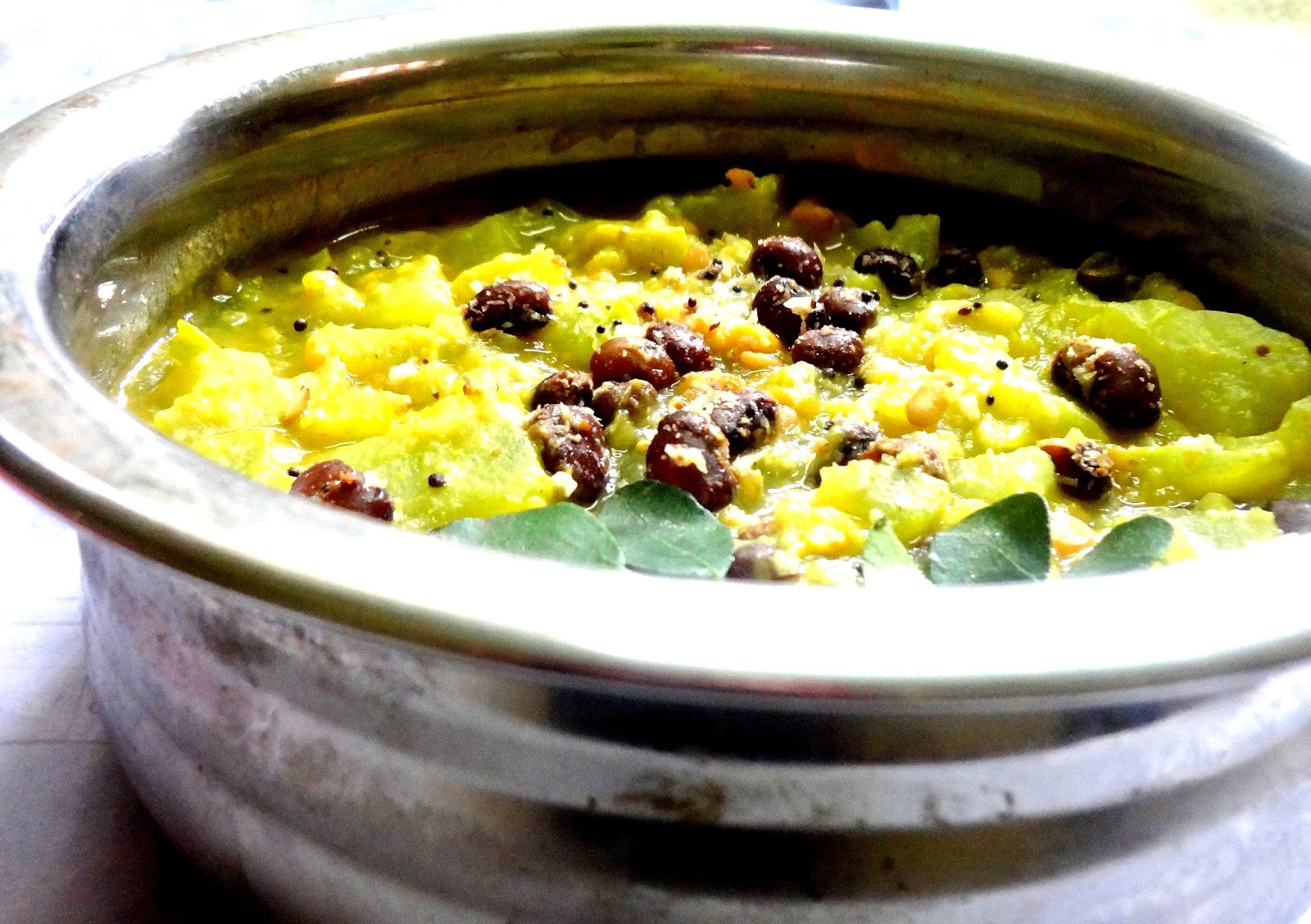 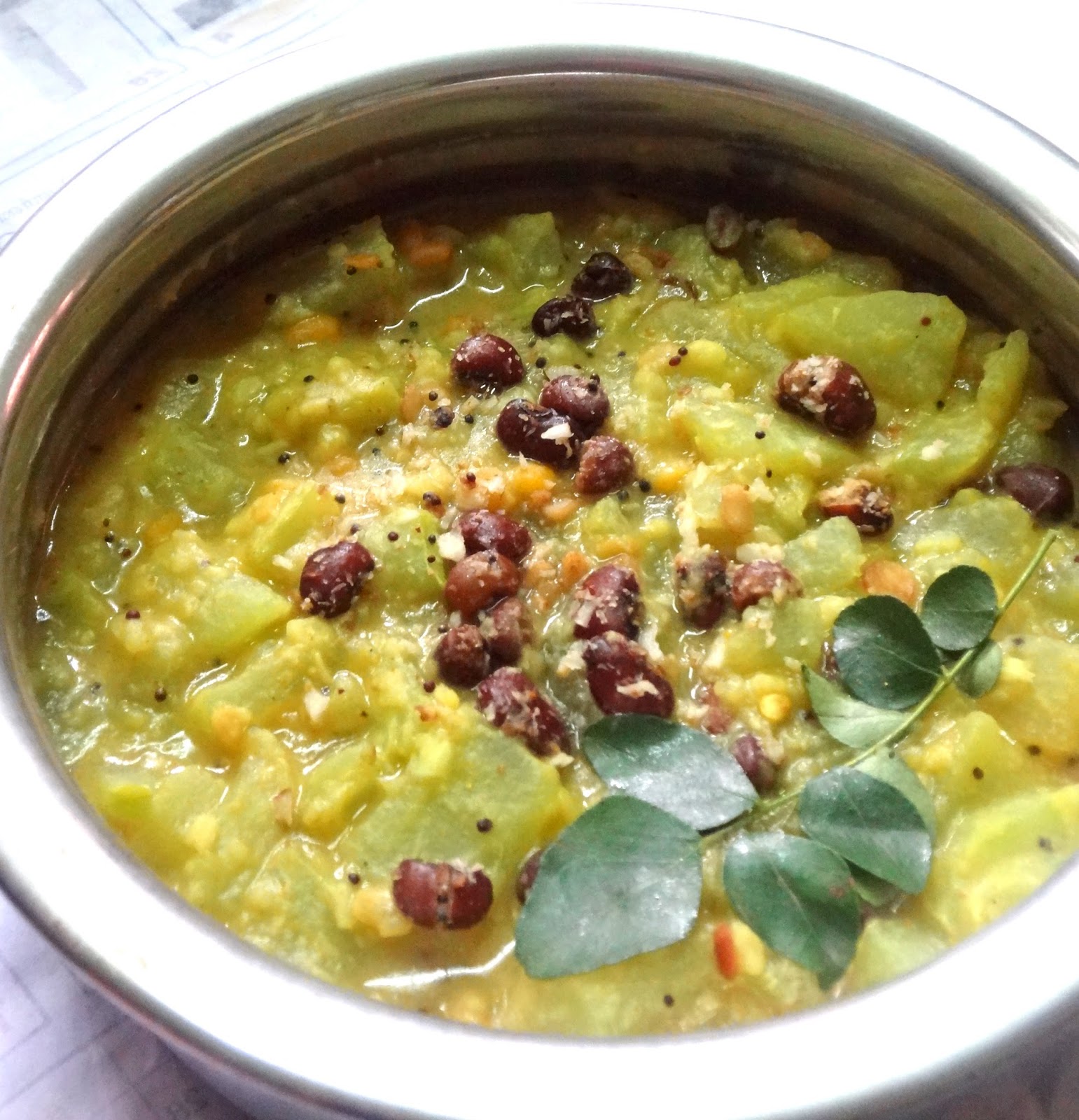 To grind to a paste

1.       Wash the chow chow, dry well, peel and remove the seed inside and the thick inner seed cover , slice it into small squares , not too small though as they will get mashed while cooking.
2.       Wash the moong dal. Drain and cook.
3.       There are two ways to cook , one is to pressure cook the chow chow with turmeric powder, salt and the moong dal together to one or two whistles.
4.       I do the other way on a stove top  as pressure cooker can mash the chow chow too much and you end up with a smooth gravy with not much bits of chow chow or dal to be seen.
5.       I cook on the stove top by taking a hard pan, cook both dal and chow chow together, moong dal also cooks quickly and so also the chow chow, you can determine how you want the gravy to look in terms of texture.

6.       Cook both chow chow and moong dal in a broad pan with little water, salt, turmeric powder, pinch of asafoetida and a pinch of rasam powder, you can cover and cook till the veggies appear soft and the dal also cooked .

7.       Meanwhile grate the coconut, and grind with 1 or 2 red chillies and ½ tsp of cumin seeds  with little water to get a paste. Paste to be like chutney consistency, not a watery paste. Keep aside.

8.       After the gravy looks cooked, it is time to add the coconut ground paste and little rice flour to thicken. I usually don’t have to add the flour as I use just enough water to cover the veggies and dal to cook, so not much watery gravy. Stir well and when it thickens a bit, remove form stove.

9.       Prepare the tempering with 1 tbsp oil, ½ tsp mustard seeds, allow to crackle, add the split udad dal, let it  brown a bit and also the ½ tsp chana dal. Pour the seasoning on the simmering gravy, stir well. Garnish with sprigs of curry leaves.

1..   Adding karamani is purely optional, I used it as I had already soaked some previous night for sundal, so just added a bit  by pressure cooking along with rice  previously.

2.   If you do not wish to use coconut in the gravy by grinding etc, simply roast 2 tbsp of coconut gratings in little oil and sprinkle on the gravy when done.

3.   We do not use onions and garlic in this dish, I leave it to your personal choice.

4.   Adding more or less of red chillies depends on your personal preference for hot gravy.

5    If you do not want to add coconut  at all completely, there is another method to satisfy the taste yet avoid the coconut paste , etc.

6.   Skip the grinding part of  coconut with cumin seeds, and red chillies , simply add cumin powder along with other ingredients while gravy is getting cooked and to make up for the coconut flavour, just do the tempering with 2 tsp of pure coconut oil.

You will never miss the coconut paste. Most often I do this to save time and also avoid too much coconut in my cooking.

7.  For those who like the coconut flavour but are unable to grind etc due to lack of time or mixie not available or power failure  or sheer laziness,  always keep a stock of coconut milk powder or liquid in tetrapak handy in the kitchen pantry.

8.   When the gravy is done just add the coconut milk directly  around 3 tsp and stir well, if using coconut powder, add little water and then straight into gravy.

You get a great aroma, look and superb creamy effect. Many times I resort to this  method also.

9.  Most vegetable kootus have more or less the same method and ingredients, basic with the typical coconut+ cumin+ red chillies paste. So if you get one kootu right, applies to most vegetables.