This is the ultimate foodie delight a dish designed to leave you fully satisfied and yet keep craving for more. No Punjabi cuisine is complete without an inclusion of this wondrous  red kidney beans  drowned in some lip smacking gravy which is concocted using the best of Indian spices,

As the cyberspace is choc a bloc with all sorts of variations and preparations of this supreme Punjabi delicacy , yet it is hard to come across the one perfect recipe for this simple bean. The true authentic dish can be tasted only at the road side dhabas dotting the Punjab countryside. It is amazing how they simply eyeball the ingredients and toss everything and produce the most divine ultimate Rajma masala.

Just as the South Indian take pride in producing the fluffiest pillowy idlis and the most crispiest dosas ever , the credit for preparing the Rajma masala in the most authentic way must go the Punjabis.


Rājmā is a popular North Indian vegetarian dish consisting of red kidney beans in a thick gravy with lots of Indian whole spices and usually served with rice and roti Although the kidney bean is not of Indian origin, it is a part of regular diet in northern regions Haryana, Punjab, Uttar Pradesh, Kashmir, Delhi, and Himachal Pradesh. This dish developed after the red kidney bean was brought to theIndian subcontinent from Central Mexico and Guatemala. Being a popular dish, it is prepared on all important occasions.

Before they are eaten, the raw bean seeds should be soaked in water for several hours and then boiled for at least ten minutes in new fresh water to degrade a toxic compound — the lectinphytohaemagglutinin — found in the bean, which would otherwise cause severe gastric upset.
Kidney beans, especially, should not be sprouted.
Similar to other beans, the common bean is high in starch, protein and dietary fiber and is an excellent source of iron, potassium, selenium, molybdenum, thiamine, vitamin B6, and folic acid.
Dry beans will keep indefinitely if stored in a cool, dry place, but as time passes, their nutritiveflavor degrade and cooking times lengthen. source WIKI 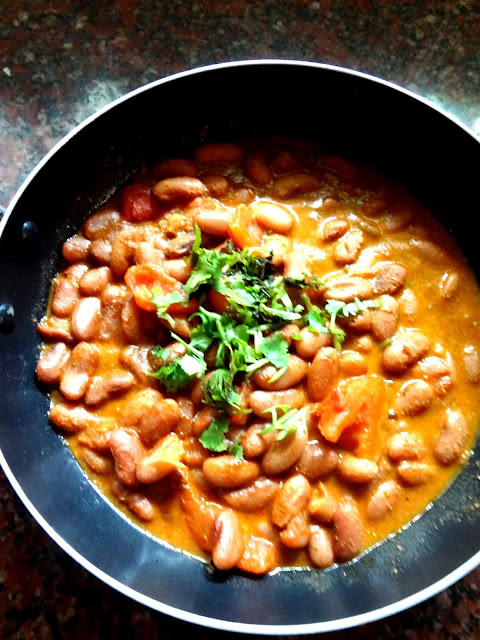 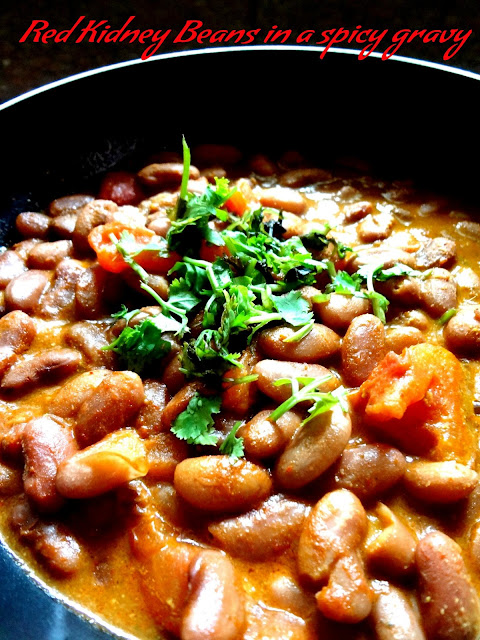 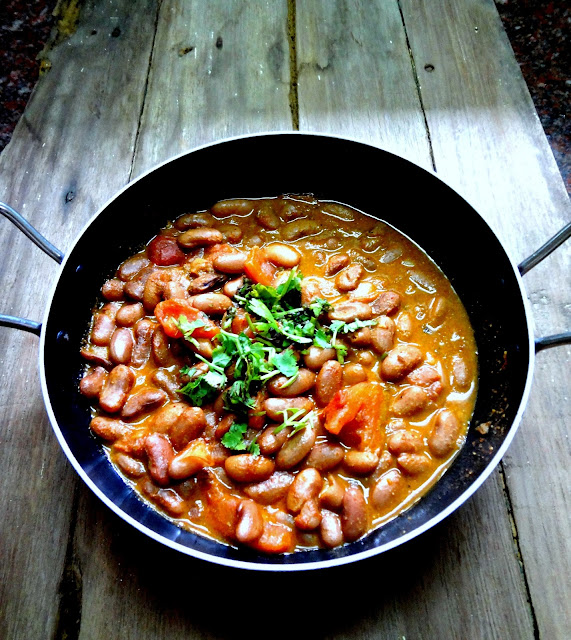 Pressure cook rajma/kidney beans in water with little salt and the texture should be soft after cooking. You can make a spice bag of some of the spices and drop it in the rajma while it is getting pressure cooked so that the rajma will soak in the flavors and aroma  of the whole spices.

This is not required though. Just take a small cheese cloth and put some cloves, bayleaves, pepper, cinnamon, star anise and tie the cloth into a small bag and drop in the vessel containing rajma. May take around 12 minutes to cook in cooker.

Remove and keep aside.

Heat oil in a pan , add jeera/cumin seeds,bay leaves, cinnamon,cloves,  fennel seeds,  pepper ,cardamom,star anise,ginger  paste and saute well. ( add garlic paste and sliced onions if you are using in the recipe at this stage)

Add tomato puree and cook on low flame till raw smell disappears.Add coriander powder, cumin powder, turmeric powder,kashmiri chilli powder and saute for a minute. Then  switch off the gas and cool the ingredients sauteed. Grind to a paste all these in a blender.
In a pan again add the rajma to the ground paste and cook for 2 minutes till the gravy thickens and rajma absorbs the flavors of the ground masala. Crush the kasuri methi leaves  and sprinkle on the gravy. Nowa  beautiful aroma of all the spices will emanate and

When slightly thickened , remove from gas and garnish with coriander leaves.

Typically Rajma chawal as it is popularly known is eaten with jeera rice and also a great side dish for rotis.