I keep surprising myself every time I decide to bake something totally unplanned. These are the real delights of a baker I think. To do the unexpected and bask in the pleasures of having accomplished something.

While making cakes and desserts with figs is nothing unusual, I wouldn't have gone for it.
Figs aren't really my preferred choice to make cakes with..I would rather have them as it is , but faced with a carton of quite luscious figs available at a reasonable price , decided the time had come to try different.

Till the very end until the cake was done and sliced I wasn't prepared for any thing spectacular but I was blown by the unusual fruity flavor and the intense cocoa flavor that made  it something delectable.

I was beginning to wish I shouldn't have added the cocoa as the taste of the figs wasn't completely felt through the various flavors. Hence I do not suggest adding any cocoa.  As my daughter has a great affinity for cocoa , I thought of pleasing her  skeptical about how she would react to a fig cake.Not that it tastes bad but I felt it interfered with the true fig flavors. Some info about Figs.


The common fig (Ficus carica) is a species of flowering plant in the genus Ficus, from the family Moraceae, known as the common fig, or just the fig. It is the source of the fruit also called the fig, and as such is an important crop in those areas where it is grown commercially. Native to the Middle East and western Asia, it has been sought out and cultivated by man since ancient times, and is now widely grown throughout the temperate world, both for its fruit and as an ornamental

Figs are among the richest plant sources of calcium and fiber. According to USDA data for the Mission variety, dried figs are richest in fiber, copper, manganese, magnesium, potassium, calcium, and vitamin K, relative to human needs.

They have smaller amounts of many other nutrients. Figs have a laxative effect and contain many antioxidants. They are a good source of flavonoids and polyphenols[9] including gallic acid, chlorogenic acid, syringic acid, (+)-catechin, (−)-epicatechin and rutin.[10] In one study, a 40-gram portion of dried figs (two medium size figs) produced a significant increase in plasma antioxidant capacity.[11]
According to the USDA,[12] 100 g of dried, uncooked fruit of the Common Fig (Ficus carica)
Source...Wiki 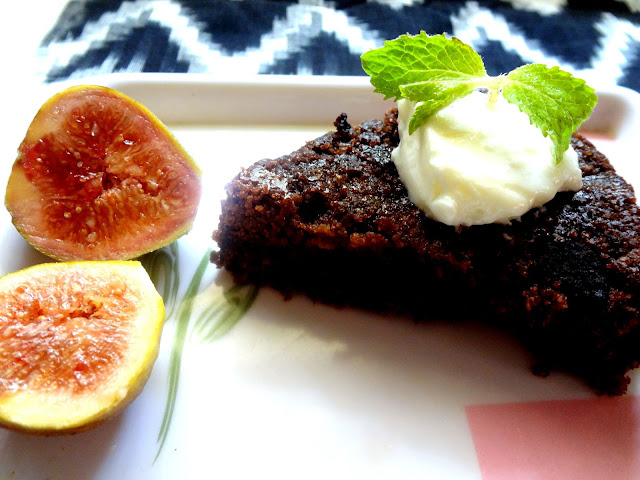 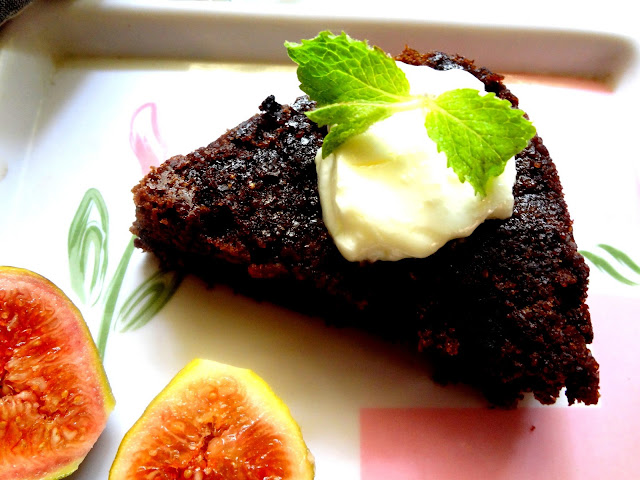 In a medium bowl, sift together flour, salt and baking powder and cocoa powder. Set aside.

Fold in vanilla and almond extracts and chopped figs.

Divide into two prepared 8 inch round cake pans. Bake at 350 degrees F (175 degrees C) for 30 minutes, or until a toothpick inserted into the center comes clean.
.

To make the filling

In a saucepan, combine 2 cups figs, brown sugar, water and lemon juice. Bring to a boil. Reduce heat to a simmer and cook until thickened, about  20 minutes. Spread thinly between layers of cake and on top.
This cake is quite moist and has a good texture. There isn't any need to add the cocoa powder.