Chitragupta means collection of pictures. It is believed that Chitragupta examines the good and bad performances of the person. When a person dies, his soul first goes to Lord Yama, where Chitragupta tallies the deeds and report it to Yama. On this day, special poojas are conducted at temples and people take bath in holy rivers and temple ponds to wash away the sins committed.

Chitragupta Temple at Kanchipuram is the only one temple in South India dedicated to Chitragupta. Thirukoteeswarar temple at Thirukodikaval, situated on the Kumbakonam - Mayiladuthurai route, has separate shrines for Chitragupta and Yama. In these temples, Chitra Pournami festival is celebrated in a grand manner every year.

There is a legend associated with Chitra Poornima involving Lord Indra, the king of Gods, and his Guru Brihaspati Lord Indra and Brihaspati once had an argument. As Indra failed to respect Guru, he stopped advising Indra who started committing sins in the absence of Guru. Days passed and Brihaspathi returned to his duty. He advised Indra for a pilgrimage to the earth to lessen the burden of sins. During the pilgrimage, Indra realized that he had been redeemed from the sins. He found a Shiva lingam under a Kadamba tree and believed that Lord Shiva had helped him in relieving his sins. Following this, he started worshipping him. He worshipped Lord Shiva with a golden lotus which he found from a nearby pond. 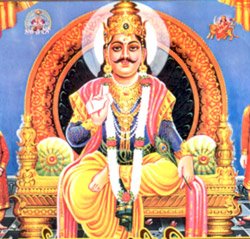 Chitra Pournami is the important function for females. They are meant this day for worshiping Chitragupta.

Chitragupta was born to parvathidevi through a painting (chitira puthiran). Later he entered into the uterus of Gomatha Kamdhenu and born on other chitra pournami and got the name chitra gupta, who is the assistant to yamadharma in accounting one's Papa-Punya karmas.

Worshipping him with chakkarai pongal and other things without salt will give immense pleasure to the whole family throughout the year.

NOTE: One should avoid taking milk and milk-products on that day since he came out from kamadhenu. (It is preferrable to take buffalo milk if available). Then after finishing usual pooja and naivedhya, we have to donate rice, vegetables, dhal and dakshina in a "MURAM" .

Also some people draw a kolam (padi kolam) with the south side alone leaving empty as a mark of entrance to him. After finishing pooja they will immediately wipe the kolam.

Worshipping Ambal in pournamis is a very special thing. Chithra pournami is famous for Meenakshi amman and Kallazhagar also. So, worshipping them also will be fruitful to us.

Hanuman Jayanti or Hanumath Jayanti is celebrated to commemorate the birth of Hanuman, the Vanara god, widely venerated throughout India. It is celebrated on the 15th day of the Shukla Paksha, during the month of Chaitra (the Chaitra Pournimaa).
Hanuman is an ardent devotee of Lord Rama, and is worshipped for his unflinching devotion to the god. From early morning, devotees flock Hanuman temples to worship him.
Hanuman Jayanti is an important festival of Hindus. Hanuman is the symbol of strength and energy. Hanuman is said to be able to assume any form at will, wield rocks, move mountains, dart through the air, seize the clouds and rival Garuda in swiftness of flight. He is worshipped in folk tradition as a deity with magical powers and the ability to conquer evil spirits. The devotees visit temples and apply tilaka of sindhūr to their foreheads from Hanuman's idol as Hanuman himself was of that color. A few thousand years before Ramayan time (in the latter part of Tretayuga - 2 million years ago), several divine souls came to Earth and modified the bodies of ape like creatures through evolutionary methods (genetic mutation) so that the animals could play the role of vehicles for these divine souls. That's how Vanara race with reddish orange color (hues of deep orange and light red) was established before the Ramayan time. Hanuman was born in to this Vanara community and was in reddish orange color. So in all the Hanuman temples we see Hanuman colored in different hues of reddish orange color.
In Maharashtra and Karnataka, Hanuman Jayanti is celebrated on the full moon day (pūrnima) of the Hindu lunar month of Chaitra. A special feature of Hanuman Jayanti is that according to some religious almanacs (panchāngs) the birthday of Hanuman falls on the fourteenth day (chaturdashi) in the dark fortnight of the month of Ashvin while according to others it falls on the full moon day in the bright fortnight of Chaitra. On this day, in a Hanuman temple spiritual discourses are started at dawn. Hanuman was born at sunrise. At that time the spiritual discourse is stopped and the offering of food (Prasad) is distributed to everyone.[1]
Spiritual discourses are organised in most of the Hindu temples on this day. Hanuman was the most powerful in the three people the Heaven people, the Hell people, and the Land people. All these Gods had blessed him when he was just a 1/2-year old child. 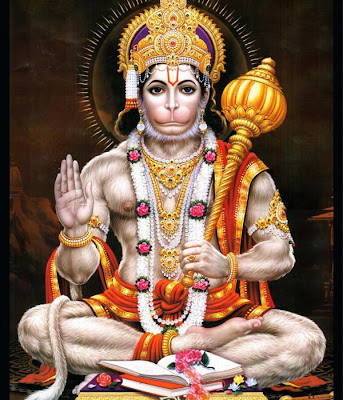